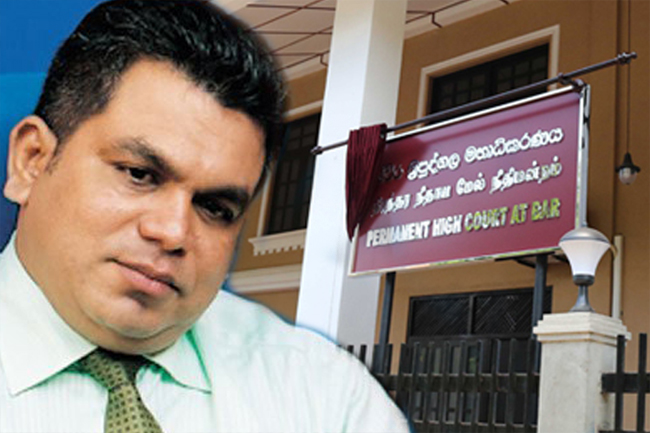 The Trial-at-Bar comprising Justice Dhammika Ganepola, Adithya Patabendige and Manjula Thilakaratne rejected the request to release on bail the former Chairman of Avant-Garde Nissanka Senadhipathi, who is one of the accused in the Avant Garde high seas arms trafficking case.

Delivering the decision, High Court Judge Adithya Patabendige stated that no special facts have been presented in the court to warrant the granting of bail to the defendant.

Therefore the Trial-at-Bar unanimously decided to reject the bail application, he said.

The case was postponed until December 03 while the court ordered to further remand Mr Senadhipathi.

The Attorney General, on August 21, requested the Chief Justice to appoint a Trial-at-Bar in Colombo High Court over MV Avant-Garde arms trafficking case.

The Bribery Commission subsequently informed the Colombo High Court that the witness hearing of Avant-Garde floating armoury case in the absence of Senadhipathi, who had left the country.

An indictment comprising 7,573 charges has been filed against the defendants of the case.

The Bribery Commission filed a case with the Colombo Magistrate’s Court against the former chairman and eight defendants for incurring a loss of Rs 11.4 billion to the government by allegedly allowing Avant-Garde Maritime Services (Pvt) Ltd to maintain a floating armoury at the Galle Fort.

The defendants of this case include Chairman of Avant-Garde Nissanka Yapa Senadhipathi, former Additional Defence Secretary Damayanthi Jayaratne, and the former Coordinating Secretary of the Ministry of Defense, Major General Palitha Fernando.