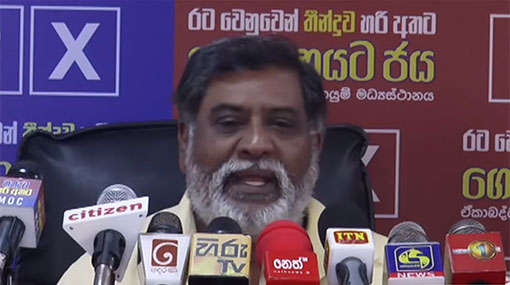 UNP is in the hands of the TNA - Varadaraja Perumal

Former North-East Chief Minister and leader of Tamil Social Democratic Party, Varadaraja Perumal, accused the Tamil National Alliance (TNA) of ‘auctioning’ the votes of the Tamils to the UNP.

Speaking to reporters today (8), he said that he supported former President Chandrika Bandaranaike during her tenure from 1995 onwards. “She promised and we had a hope and she also did to an extent in bringing a reasonable political solution to the Tamil people and she presented the political package in 2000 in the parliament.”

“Who burnt it? The UNP burnt it. And they opposed Chandrika Bandaranaike,” he said.

Perumal said that he is sorry today to see the same Madam Chandrika Bandaranaike supporting the same UNP which was “against the Tamils’ interests” and today she is trying to promise that the same UNP “will deliver goods to the Tamil people.”

He said that SLPP presidential candidate Gotabaya Rajapaksa is an efficient person in doing the administration of development and he ended the war.

In 2015, the UNP came to power and the last five years they have not done anything except last 3 months of ‘Gamperaliya’, he said.

“Gamperaliya is a bribe to the federal party. A bribe to the TNA. Because to gain the support of the TNA to the UNP. They are making the auction of the Tamils’ vote to the UNP.”

“UNP is in the hands of the TNA,” he charged.

He alleged that the TNA knows that the Tamil people are going to vote in majority to Gotabaya Rajapaksa. “They are trying to disturb it, but they can’t do that.”

Varadaraja Perumal stated that neither he nor his party is doing any “business with Mr Gotabaya or any Rajapaksas.”

“We know that he is a man of vision plus with regard to the political issues also, reasonably he will do better than the UNP and the TNA.”