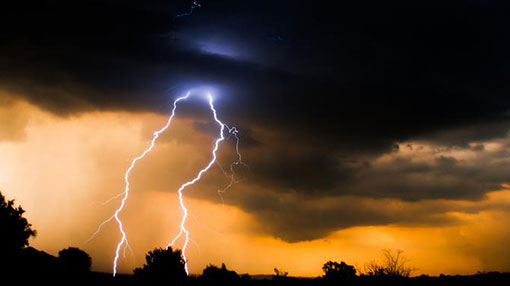 Thundershowers accompanied by severe lightning are likely to occur at several places in Western, Central, Sabaragamuwa, North-western, Uva, North-central and southern provinces and in Mannar, Vavuniya and Ampara districts during the evening or night.

Heavy falls above 100 mm can be expected at some places in the above areas, the Department of Meteorology said issuing a weather warning.

Temporarily strong gusty winds up to 70-80 kmph also possible during thundershowers, it said.

Due to the active cloudiness in the sea area extendingfrom Trincomalee to Colombo, via Batticaloa Hambantota and Galle, the possibility for heavy thundershowers and sudden roughness, associated with sudden increase of wind speed up to 70-80 kmph in the above given sea areas is high.

Naval and fishing communities are requested to be vigilant in this regard.

The active clouds formed in the western, Southern, South-eastern and Eastern sea areas to the island are likely to persist within next 06 hours further.