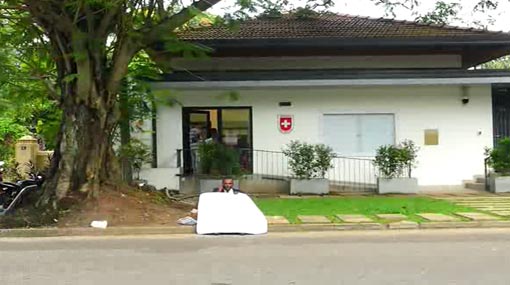 Major (Retired) Ajith Prasanna has called off his protest fast he commenced before the Embassy of Switzerland in Colombo today (02).

This was on the requests of MP Athuraliye Rathana Thero and Rear Admiral (Retired) Sarath Weerasekara.

Major (Retired) Ajith Prasanna, this morning, launched a protest fast demanding that the Swiss Embassy staff member involved in the alleged abduction incident be produced to make a statement to the police.

The Retired Major staged the protest in front of the Swiss Embassy in Colombo and carried a placard which read: “The Ambassador of Switzerland, do not tarnish the good name of our motherland. Let the lady give a statement to the Sri Lanka Police.”

The Ministry of Foreign Relations, yesterday (01), issued an update on the investigations carried out on the alleged incident stating that the account of the event as per told by the Embassy does not match with the actual events that took place on that day.

The investigations had been carried out without a statement from the alleged victim herself and the foreign ministry requested the cooperation of the Swiss Embassy in further investigations.