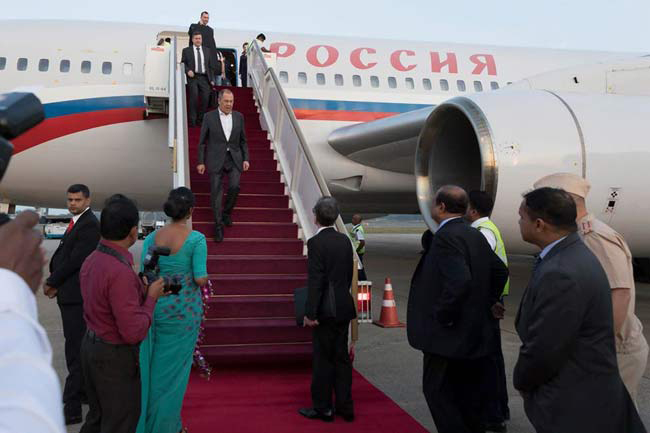 Accompanied by 42 Russian envoys, Minister Lavrov reached Bandaranaike International Airport (BIA) at around 6.35 am this morning.

The delegation had arrived in the island via a special Russian flight which took off from Moscow, according to Ada Derana reporter.

State Minister of International Co-operation Susil Premajayantha, a group of officials of the Foreign Ministry, Russian Ambassador to Sri Lanka and several other officers have accorded a warm welcome to Minister Lavrov.

His discussions will focus on the current state of relations between Russia and Sri Lanka, the prospects for promoting political dialogue, developing cooperation in the trade-economic, humanitarian and other spheres, as well as the expansion of the bilateral treaty and legal basis.

Special attention will be paid to expanding cooperation within international organizations.

In the meantime, US Acting Assistant Secretary for South and Central Asian Affairs, Alice Wells arrived in Sri Lanka this morning. She, who is accompanied by three delegates, is scheduled to hold a series of bilateral talks with top government officials, politicians, civil society representatives, and other parties during her two-day visit.

Foreign Minister of the People’s Republic of China Wang Yi and 16 Chinese envoys have also reached the island last night. He was welcomed by State Minister Susil Premajayantha.

According to reports, he plans to hold talks with President Gotabaya Rajapaksa, Prime Minister Mahinda Rajapaksa and Foreign Affairs Minister Dinesh Gunawardena and other high officials.