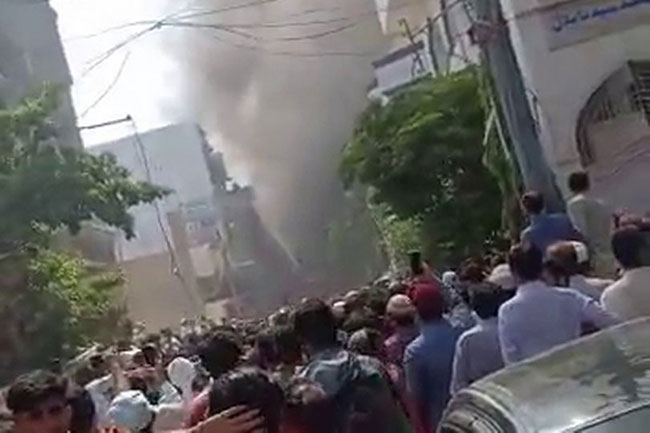 A Pakistan International Airlines (PIA) plane traveling from Lahore to Karachi has crashed close to Karachi airport, the civil aviation agency says. A PIA spokesman told local media there were more than 90 passengers on board.

An Airbus A320 has crashed in a residential area near Karachi in Pakistan, the country’s civil aviation agency says.

“The plane crashed in Karachi. We are trying to confirm the number of passengers but initially it is 99 passengers and eight crew members,” said Abdul Sattar Khokhar, the spokesman for the aviation authority.

PIA spokesperson Abdul Sattar told the newspaper Dawn that the flight was carrying 90 passengers and had been due to land at Karachi from Lahore.

The respected daily said a rescue operation was underway and emergency workers had arrived at the scene.

Social media uploaded by journalists showed footage showing plumes of smoke and flames rising from the site of the crash.

Initial reports suggest properties in the area were damaged.

Many casualties are feared after the plane crashed into houses shortly after the pilot reportedly notified air traffic control of a technical fault.

The Pakistan International Airlines jet was on its final approach to Karachi Airport when it went down in a residential area in Model Colony and disappeared from radar.

A number of houses were destroyed and a major rescue operation was underway to save any survivors.

Pictures and video show a huge cloud of black smoke billowing into the air following the crash, which happened at about 2.45pm local time on Friday.

Flight PK8303 was on a domestic journey from Lahore.

Civil aviation sources said the captain reported a technical fault and the planbe disappeared from radar shortly before it was due to land at Karachi’s airport, 24 News reported