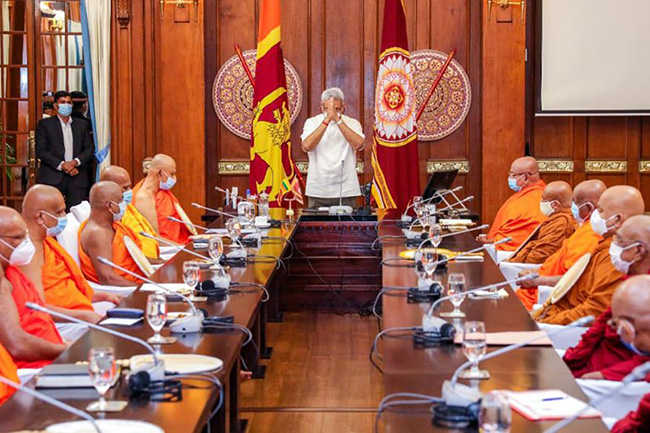 A Task Force headed by the Defence Secretary will be appointed by President Gotabaya Rajapaksa to conduct a comprehensive survey of archaeological sites in the East and to take measures to preserve them, says the President’s Media Division (PMD).

Several parties have voiced their concerns regarding the destruction done to historical monuments, the PMD said further.

After considering all aspects, a broad programme will be launched with the support of the Department of Archaeology in order to preserve historic sites.

President expressed these views during the second meeting held at the Presidential Secretariat today (22) with the Buddhist Advisory Council which is scheduled to meet on the third Friday every month.

The Maha Sanga has enlightened the President on the necessity of a religious discourse due to misconduct of certain monks that will cause discredit to Buddhism and Tripitaka. President has responded that steps could be taken to rectify the situation during his tenure of office if corrective measures are proposed.

The clergy has commended the initiatives launched under the guidance of the President to protect the entire citizenry in the wake of the global pandemic of COVID-19 which has caused a devastating impact on every country in the world. President pointed out that it is a great achievement that not a single person from the community was found infected after April 30.

“Those who are returning from abroad are being sent for quarantine. Of these returnees, few from Dubai and Kuwait have been infected with the virus. Safety measures are underway to examine people arriving from overseas under the instructions of health authorities,” the PMD continued.

The Buddhist Advisory Council has discussed at a length on Pirivena education and school education system in the country. Maha Sanga pointed out how attempts were made to remove the subjects of Literature and History from the school curricula during certain periods in the past. While pointing out that education is the first and foremost priority in his election manifesto, the President said preliminary steps have already been taken to implement a National Education Policy.

The Maha Sangha has stressed the need for effective implementation of a comprehensive programme to defeat the drug menace threatening the country. The Theros further said that there is a huge responsibility lies with the Maha Sangha in this regard in the same manner as that of the government.

President Rajapaksa said that large quantities of drugs that were smuggled into the country were seized within a very short period of time. He further said that he will take every possible step to control the prevailing situation to the maximum level as well as to totally eliminate the drug menace from the country.

The President pointed out that he will fulfil the responsibility for national security bestowed upon him to the highest level and he has appointed talented and expert individuals in charge of this task. Intelligence Unit has been vested with full powers to deal with issues.

President Rajapaksa said that the security forces have been given the power to closely monitor the terrorist and extremist activities.

The Maha Sangha further said that there are no words in the vocabulary to felicitate the speech made by the President at the National ‘Ranaviru’ commemoration Day and invoked blessings on the President.

The Theros said that there is a huge responsibility with the Maha Sangha to rebuild the society which has gone chaotic. The Maha Sangha criticized the practice of certain media outlets that create a rift between the Maha Sangha and the politicians.

The Theros also pointed out that while the entire world appreciates the steps taken by the government to defeat the COVID-19 pandemic, the behaviour of the opposition is disgusting.

Emphasizing that Maga Sanga has an enormous responsibility in the efforts in resuming normalcy in civilian life in the wake of the pandemic the Theros pledged to work for the benefit of the society through a committee comprising Maha Sanga.