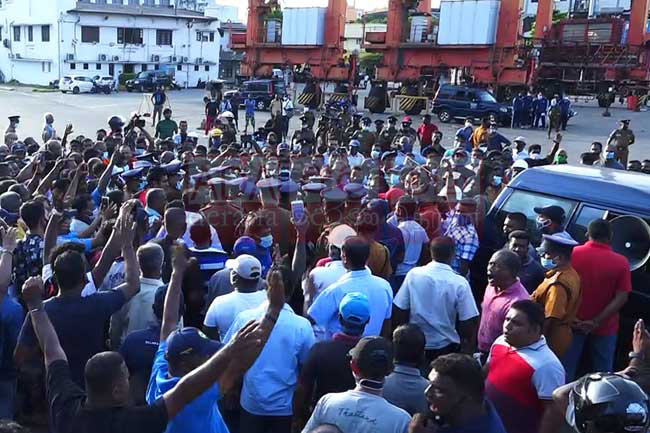 The Police have obtained a court order preventing the Colombo Port workers, who staged a protest on Friday (31), from obstructing Bloemendhal Port Access road and adjacent roads.

In the meantime, a discussion was held between the Senior DIG in charge of the Western Province Deshabandu Tennakoon and the trade unions at the office of the Chairman of the Sri Lanka Ports Authority (SLPA) this afternoon (01).

The focus of this meeting fell on removing the obstruction at the port access road in order for container trucks near the ‘Hartal Bridge’ to enter the port premises.

However, as the discussion failed to reach an agreement, the Police resorted to obtaining a court order with regard to the matter.

Trade unions of the Colombo Port, who launched a strike action on the 2nd of July, later called off their strike action following a meeting held with Prime Minister Mahinda Rajapaksa.

During this discussion, held on July 03, a decision was taken to unload the 03 gantry cranes brought down from China, at the Eastern Terminal of the Colombo Port.

However, 23 trade unions of the Colombo Port resorted to a Satyagraha on the 29th of July, demanding a written affirmation stating that the East Container Terminal (ECT) is still under the purview of SLPA.

They subsequently withdrew from all duties with effect from Friday (31), bringing operations at the port to a standstill.

Minister Wimal Weerawansa and former Parliamentarian Udaya Gammanpila on Friday night (31) held discussions with the Colombo Port trade unions on protest, however, the Satyagraha staged by them is continuing for the fourth consecutive day while the strike action entered day two.