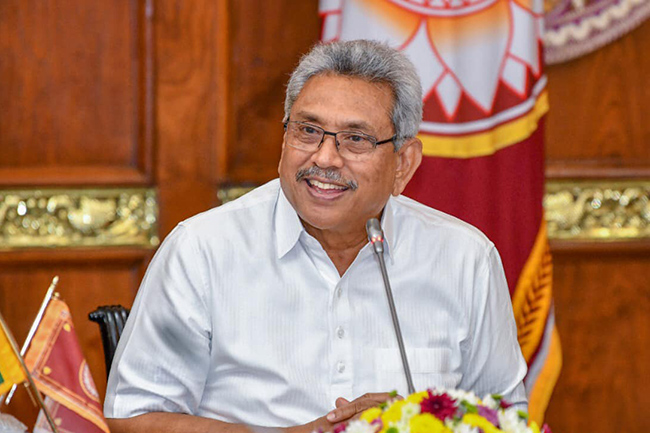 Sri Lanka can use its unique locational advantage to become one of the world’s leading maritime hubs, President Gotabaya Rajapaksa said today (15).

He pointed out that development goals could be achieved speedily by developing the ports in the country while emulating the world’s most advanced ports as examples.

The President emphasized the need to develop the country’s ports to a higher level that would make them capable of attracting world’s largest cargo ships each with a capacity of 24,000 containers.

He made these remarks during a discussion held at the Presidential Secretariat today (15) on the future activities of the State Ministry of Warehouse Facilities, Container Yards, Port Supply Facilities and Boat and Ship Building Industry Development, the President’s Media Division (PMD) said.

The President further noted that the port system should be developed to cater to the needs of international vessels plying close to the country and in parallel to these initiatives Ports in Colombo, Galle, Trincomalee, Kankesanturai and Oluvil should be developed.

The development of the Eastern and Western Terminals of the Colombo Port should be accelerated. A special attention was paid to upgrading the reshipment handling capacity, offering warehouse facilities and container terminals as well as supply facilities of international standards.

It was also discussed to construct new warehouse facilities in areas such as Ratmalana, Peliyagoda and Veyangoda to promote Colombo Port as a Transshipment Hub.

The government should intervene to construct fuel storage tanks and supply fuel to the vessels, the President said while authorizing the construction of a docking bay in Beruwala to facilitate the launch of large boats into the sea.

“It is necessary to expand manufacturing, repairs and maintenance of ships and boats aiming the global market. The expansion of facilities to exchange naval staff centering main ports is also important’, President highlighted.

Minister Rohitha Abeygunawardena, State Minister Jayantha Samaraweera, Head of the Presidential Task Force on Economic Revival, Mr. Basil Rajapaksa, Secretary to the President P.B. Jayasundera, Secretaries of both Cabinet and State Ministries, Heads of the Line Institutes and entrepreneurs in the shipping industry were present at the discussion.