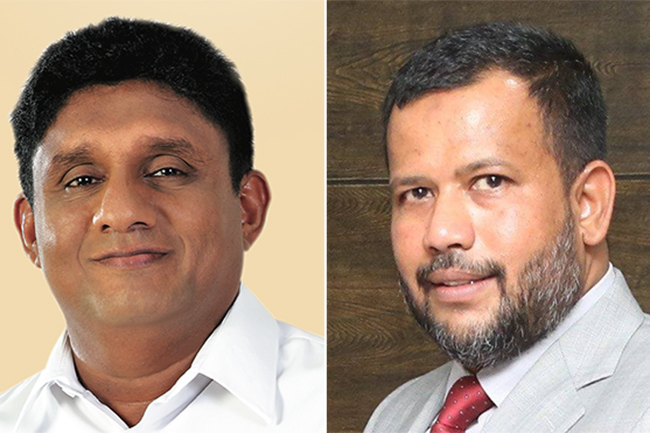 Three days have passed since the Attorney General directed the Police to arrest MP Rishad Bathiudeen, however the investigation officers are yet to locate him.

The Criminal Investigation Department (CID) meanwhile recorded statements from Opposition Leader Sajith Premadasa and MP Rauff Hakeem with regard to the phone conversations they have had with the parliamentarian.

They also recorded a statement from MP Bathiudeen’s wife at their residence in Colombo last evening (15). However, she has told the investigating officers that the parliamentarian had not kept in touch with her since October 12 and that she is unaware of his whereabouts.

In the meantime, an attorney-at-law representing MP Bathiudeen filed a writ application yesterday, seeking an order from the Court of Appeal to prevent his arrest.

The writ application has been fixed for support on the 20th of October before Appeals Court justices Kumudini Wickramasinghe and Sobhitha Rajakaruna.

Then-Minister of Industry and Commerce Rishad Bathiudeen, the director of the project Mohamed Yaseen Samsudeen and the project accountant Alagarathnam Manoranjan are accused of violating Article 82(1) of Presidential Elections Act, No. 15 of 1981 by misappropriating public funds to the tune of Rs. 9.5 million.

They have allegedly misused 222 buses belonging to the state-owned Sri Lanka Transport Board (SLTB) for transporting IDPs from Puttalam to polling stations in Silavathurai, Mannar during the 2019 Presidential Election.

The CID, upon the direction of the Attorney General, had sought the Colombo Fort Magistrate to issue a warrant to arrest MP Rishad Bathiudeen and the other two suspects on charges of criminal misappropriation of public funds and violation of election laws.

However, the magistrate ruled that the Police can proceed to arrest the suspects without a warrant.

Thereby, Attorney General Dappula de Livera directed the Police to arrest the three suspects according to the law.

Alagarathnam Manoranjan was taken into custody by the CID on Tuesday (13) in the area of Kirulapone. He was remanded until the October 26 after being produced before the Fort Magistrate’s Court.

In the meantime, a constable attached to MP Bathiudeen’s security detail was also taken into custody the following day, for allegedly aiding the parliamentarian to evade the arrest. He was apprehended in Wellawatte area, along with two cars and two firearms.

On October 14, the Fort Magistrate issued a travel ban on MP Bathiudeen upon a request by the CID.