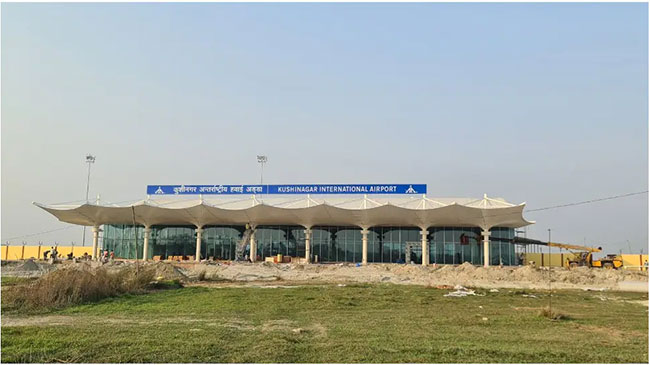 Sri Lanka’s Minister for Youth and Sports Namal Rajapaksa and hundred plus members of the Buddhist clergy will be in Uttar Pradesh’s Kushinagar at the inauguration of its international airport.

The minister will be aboard the first international flight landing at Kushinagar airport from Sri Lanka. Besides, 25 representatives and 100 Buddhist pilgrims will also arrive in the same flight.

Many VVIPs and diplomats will also attend the inauguration, according to Indian media reports.

Kushinagar is key to Buddhist pilgrim circuit. It is believed that the founder of Buddhism, Gautama Buddha, attained Mahaparinirvana at this location.

“Kushinagar International Airport has the longest runway of 3.2km length in the state and is 45m wide. The airport has the capacity for four arrivals and four departures of flights per hour. It also has a 3,600 square metre interim passenger building and arrangements are being made to make night flights also possible.

The international air connectivity will give a big boost to tourism as Buddhist pilgrims and tourists from Sri Lanka, Japan, China, Taiwan, South Korea, Thailand, Singapore, Vietnam will be able to reach Kushinagar directly. They will also cover the Buddha circuit, including Lumbini, Bodh Gaya and Sarnath, said Kushinagar MLA Rajnikant Mani.

This comes a little after the Indian Army Chief General MM Naravane and foreign secretary Harsh Shringla visited Sri Lanka.  Later this year, Sri Lanka will be hosting BIMSTEC summit, and PM Modi is expected to attend in-person, depending on circumstances.

Lately, there has been an increased focus on strengthening the Indian and Sri Lankan Buddha connect. Recently, in a conversation with WION, Sri Lankan Consul General in Mumbai Ambassador Dr. Valsan said, “Buddhism is the biggest link given to us by India. Dream of every Buddhist in Sri Lanka is to pay homage at least once in a lifetime at pilgrimage sites in India.”

Another focus of the two countries is on the Ramayana link. The new Sri Lankan high commissioner Milinda Marogoda has brought with him a stone from “Sita Eliya” in Sri Lanka. This stone will be used during the construction of Ram temple at Ayodhya.

Sita Eliya is believed to be the place where Goddess Sita was held captive by Demon King Ravana. In Ramayana, the area has been mentioned as Ashok Vatika.