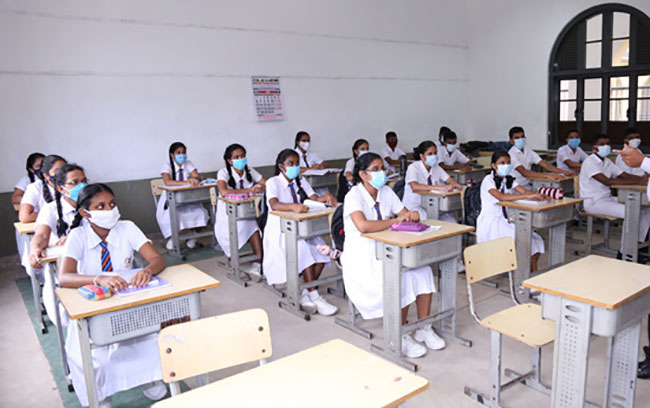 NIE reveals impact of Covid-19 on education in Sri Lanka

Sri Lanka’s National Institute of Education (NIE) says that a new methodology has been devised to cover the loss in education suffered by the country’s school children due to the Covid-19 pandemic.

NIE Director General Dr. Sunil Jayantha Nawaratna stated that under the proposed system, precedence would be given to essential sections of syllabus and that a programme has been prepared to cover the loss in education and learning for the years 2020 and 2021.

He said that the period from November this year to March next year has been allocated for this purpose and that it might extend until April. Education courses will be conducted during that period, he said.

Dr. Nawaratna said that this will be implemented from November 01 and that the principals and teachers of schools have been given freedom to decide how to cover the curriculum.

He stated that the proposals were put forward following discussions with the Education Ministry and the Commissioner General of Examinations and that it could be amended according to the examinations scheduled.

Meanwhile the National Institute of Education has carried out an estimation of the learning loss suffered by students across the island due to the Covid-19 pandemic.

According to its figures, the learning loss in the year 2020 has been estimated as 55% within the Western province and 45% in other provinces.

So far in 2020, it has been estimated as 90% in the Western Province and 70% in the other provinces, Dr Sunil Jayantha Nawaratna said.

Last month, UNICEF had said that school closures have led to alarming inequities in learning opportunities for children in South Asia, despite significant efforts by governments and partners to expand remote learning.

According to UNICEF research conducted in India, the Maldives, Pakistan and Sri Lanka, school closures in South Asia due to the COVID-19 pandemic have interrupted the learning of 434 million children.

According to UNICEF’s research, a substantial proportion of students and their parents reported that students learnt significantly less compared to pre-pandemic levels. In India, 80 per cent of children aged 14-18 years reported lower levels of learning than when physically at school.

Similarly, in Sri Lanka, 69 per cent of parents of primary school children reported that their children were learning ”less” or ”a lot less.”

Girls, children from the most disadvantaged households and children with disabilities faced the biggest challenges while learning remotely, it said.