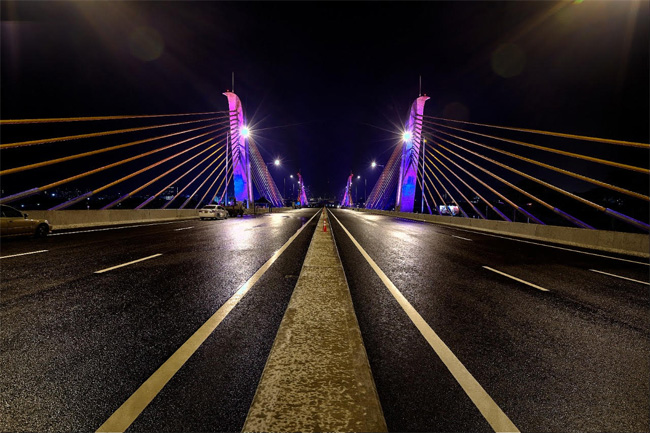 The new state-of-the-art Kelani Bridge “Golden Gate Kalyani” will be open to the general public with effect from 3.00 p.m. today (November 25), the Ministry of Highways announced.

The existing Entry Ramp to Colombo – Katunayake Expressway (E03) from the Peliyagoda Roundabout will be temporarily closed for 3 days, from 25th November 2021.

The vehicles entering CKE can use the entry ramp from Peliyagoda – Puttalam Road (A3) to the Peliyagoda Interchange and the entry ramps at Orugodawatta and Ingurukade Junctions, the RDA said.

The new bridge was declared open yesterday in a ceremony held under the patronage of President Gotabaya Rajapaksa and Prime Minister Mahinda Rajapaksa.

The six-lane bridge, which aims to ease the traffic congestion in Colombo and suburban areas, is the first-ever to be constructed in Sri Lanka with hi-tech stay cables.

After the Colombo-Katunayake Expressway was declared open, the number of vehicles entering the city of Colombo on a daily basis soared considerably. As the capacity of the existing bridge was inadequate for the large number of vehicles driving across, preliminary plans for a project to construct a new bridge were drawn up in 2012 by the government of Sri Lanka and the Japan International Cooperation Agency (JICA).

Its feasibility study was conducted in 2013 and the then-Cabinet of Ministers green-lighted the construction of the bridge in 2014. The relevant agreements were also signed in the same year.

The Bridge consists of six lanes from the entrance of the Colombo-Katunayake Expressway towards the Bandaranaike Roundabout and from that point onwards, the flyover will be four lanes towards Orugodawatte and the Ingurukade Junction. This will enable access to the elevated expressways from Ingurukade Junction to the Colombo Port City and from Orugodawatta to Athurugiriya.

This bridge features a cable support system that distributes the weight of the deck between two towers. The deck is hung on vertical suspender cables and the main cables, suspended between towers, are connected to the anchorages at each end of the bridge.