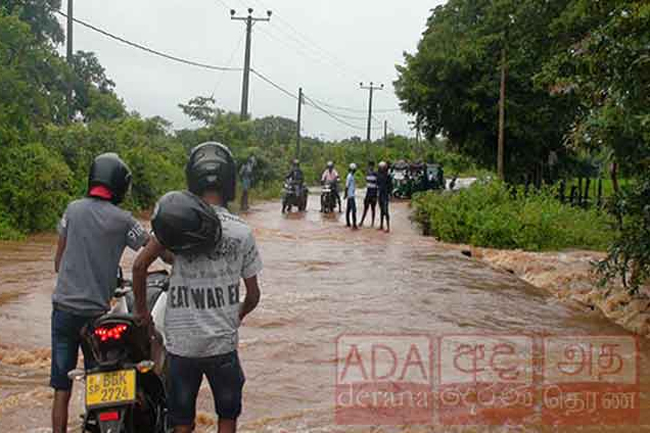 The Department of Irrigation today issued an ‘Amber’ alert for a considerable flood situation in the low-lying areas of Deduru Oya River Basin as the reservoir’s spilling discharge is expected to be increased with the heavy rainfall.

The reservoir, maintained by the Irrigation Department, is now spilling with a discharge rate of 27,800 cubic feet /sec currently, according to Director of Irrigation (Hydrology) Eng. S.P.C. Sugeeshwara.

The residents in the area and motorists are requested to pay high attention to future weather advisories.

The disaster management authorities and district/ divisional administrative officers have been requested to take necessary precautions in this regard.

Kurunegala District Secretariat stated that the main road to Anuradhapura via Padeniya and Kurunegala is inundated after 08 spill gates of Deduru Oya were opened.

The motorists are urged to use alternative routes as the Puttalam-Nikaweratiya road near the Nikaweratiya Bridge is also about to be flooded.

Meanwhile, the Department of Meteorology, in a weather advisory issued earlier today, said the prevailing low-level atmospheric disturbance over south-east of Sri Lanka and adjoining south-west Bay of Bengal has developed into a low-pressure area and currently located in east of the island.

Under the influence of this system, heavy showers above 100 mm can be expected at some places in Eastern, Uva, Sabaragamuwa, Central, North-western, Western and Southern provinces as well as in Polonnaruwa district.

Fairly heavy showers above 75 mm can be expected at some places elsewhere in the island.