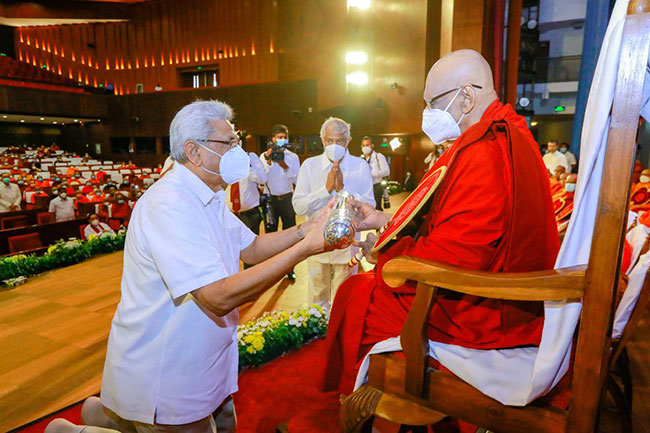 The State Ceremony to award ‘Aktha Pathra’ to the new Mahanayake of Sri Lanka Amarapura Maha Nikaya, the Most Venerable Dodampahala Chandasiri Nayaka Thera, was held at the Bandaranaike Memorial International Conference Hall (BMICH), Colombo this afternoon (14) with the participation of President Gotabaya Rajapaksa and Prime Minister Mahinda Rajapaksa.

The President launched the official website of the Sri Lanka Amarapura Maha Nikaya while the Secretary of the Dayaka Sabha R.A.D. Sirisena presented the amended list of temples belonging to the Nikaya to the Mahanayake Thera.

Addressing the gathering, the President said that the Buddhist community bless the Mahanayake Thera for his great contribution made to create a peaceful society, a content citizen and a good Buddhist.

Most Venerable Dodampahala Chandasiri Nayaka Thera has conducted sermons on the Buddha’s teachings and Theravada Buddhist traditions by visiting a number of countries for the benefit of the people and President Rajapaksa said that the Thera has been appointed as the Mahanayake to fulfill a great deal of responsibilities for the future of Amarapura Nikaya.

Meanwhile, Prime Minister Mahinda Rajapaksa recalled how the Most Venerable Dodampahala Chandasiri Nayaka Thera contributed to build libraries in temples damaged by the tsunami in 2004 and how this helped the monks who worked for the advancement of the Sasana.

The government led by President Gotabaya Rajapaksa is playing a major role in the conservation and reconstruction of temples, he said. The Prime Minister said that Chandasiri Nayaka Thera continues to provide necessary guidance and advice in implementing these measures.

The members of the Maha Sangha including Mahanayake and Anunayake Theras, Cabinet and State Ministers, Governors, Members of Parliament and other People’s Representatives, Ambassadors, Public Officials and members of the Nikaya Dayaka Sabha were also present.