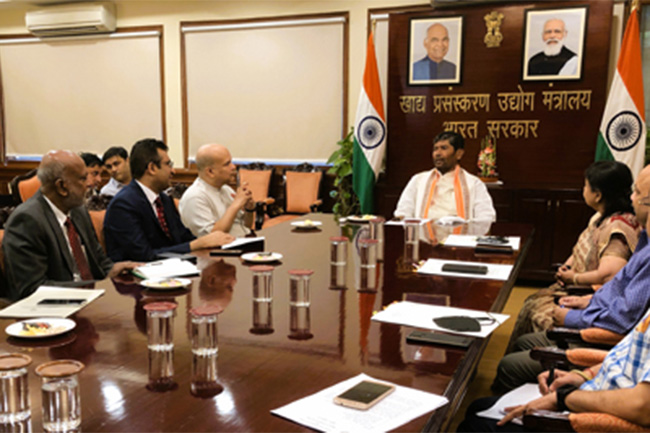 Sri Lanka and India have agreed to explore further avenues towards greater cooperation in the food processing and dairy sectors.

The matter was taken up for discussion when Sri Lanka’s High Commissioner to India, Milinda Moragoda met with India’s Minister of Food Processing Industries Pashupati Kumar Paras on Friday (July 01) in New Delhi.

While thanking the Minister, High Commissioner Moragoda stressed the importance of establishing close linkages between India and Sri Lanka in various sectors under the Minister’s purview, in particular the dairy industry.

The High Commissioner observed that the import of milk powder from India including through the existing credit line would contribute to increase nutrition levels among children in Sri Lanka.

The Minister and the High Commissioner agreed that cooperation could commence with the dairy sector, and it could later be expanded into other sectors falling under the supervision of the Ministry of Food Processing Industries.

High Commissioner Moragoda said the ultimate objective of these efforts would be greater economic integration of the two countries.

With a view to looking into the way forward for cooperation in these sectors, it was decided to form a study group that would comprise officials from the India’s Ministry of Food Processing Industries and the High Commission of Sri Lanka as well as other relevant stakeholders both in India and Sri Lanka. It was also decided to have the first meeting of the study group soon.

Minister Paras, who hails from the State of Bihar, is the incumbent President of the Rashtriya Lok Janshakti Party, which is part of the ruling National Democratic Alliance led by Prime Minister Narendra Modi. He has been a member of the Bihar Legislative Assembly seven times since 1977 and had served thrice as a Minister in the State.

Secretary to the Ministry of Food Processing Industries, Anita Praveen, senior officials of the Ministry as well as senior diplomatic officers of the High Commission of Sri Lanka in New Delhi also attended the meeting.