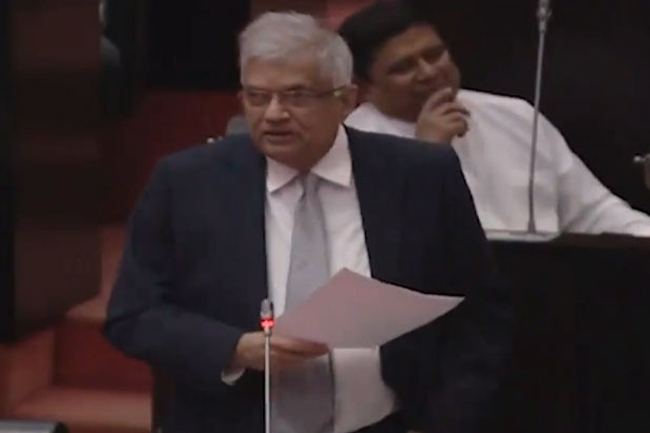 Violence and anarchy will not be allowed to prevail under the guise of human rights, President Ranil Wickremesinghe pledged today, adding that if any party engages in such an attempt, the security forces will be used to suppress it completely.

Under such circumstances, the President emphasised that everyone from the lower officer of the army to the rank of field marshal is obligated to fulfill their responsibility.

The Head of State stated that he wants to protect human rights, adding that anarchy and violence cannot be allowed to encroach on human rights.

The full speech delivered by the President is as follows:

Before I talk about this subject, I must remember two things that I mentioned yesterday. MP Mujibur Rahuman said that three fears have arisen in the President’s mind. I want to tell you that a person cannot have three fears. The three fears occurred in Vaishali city [of ancient India]. Fear of disease, fear of inhumanity, and fear of death can occur in a group of people. I ask him to listen to the Ratana Sutra to clarify that point. A person never has three fears.

Also, my friend Mr Vijitha Herath stated that Ranil Wickremesinghe, who sat in the presidential chair thanks to the ‘Aragalaya’, is suppressing the same ‘Aragalaya’ today. Not because of the merit of the Aragalaya, if the president of this country goes, the Prime Minister should take that position. Besides, according to the law, I should have been the acting president. My house was set on fire, I was told to get out. But, I didn’t quit, that’s why I’m here.

Our Opposition Leader also said today that I asked for this presidency. I didn’t ask for this. I accepted this because of the situation in the country. The Mahanayake Theros also requested me. I didn’t ask them. I didn’t write them letters.

Today, the Leader of the Opposition has forgotten the letter he sent to President Gotabaya Rajapaksa on May 12.

“Mr President, I declare that I have not decided to accept the post of Prime Minister as the leader of the Samagi Jana Bala Sandanaya to form a short-term government under the leadership of the SJB alliance as the main party of the opposition.” After my speech, I request that this entire letter be included in the Hansard.

Mr Gotabhaya Rajapaksa went and took the advice of the Leader of the Opposition. If you want, you can see it in the party constitution. A disciplinary investigation can be held. Don’t blame me. He is the one who agreed to resign from the presidency within a specific, period.

So he left after 02 months after I took the oath. It was not you who told him to leave. So what do I do?

When talking about the army, some people said that the expenditure of the army has increased. According to some people, the allocations for the military cannot be reduced in 24 hours. The 25,000 employees cannot be put on the road at once. We are making a plan now. It should be done accordingly. The army had to bear more expenses this time. We cannot stop it. Although the number of troops has decreased, promotions have increased. Such facts have also affected this.

The other thing is that now we have deployed the army for food security programs. Also, we get a lot of income from military farms, and I have told them to use the army as much as necessary for the transportation of those goods. We need to look at the future of the army. We are working according to the Security 2030 report for that. We must plan our defences.

It is impossible to say that there is no threat in the world. These conditions are changing. Not the 1971 threat, the 80s, or the Easter Sunday incident. These threats happen in different ways. We must remember that. We must look at global conditions. We need to focus on the Indian Ocean. Our naval forces should be increased by 2030. The army may decrease.

The Air Force may have more fighter jets. Drone technology is needed. By 2040, this situation will increase even more. We want to see how this will continue. We need to reduce our defence expenditure to maintain 3%-4%.

If we can, we have enough money to bring our economic growth rate to 8%. This situation was created in Singapore with this 8% economic growth for many years. We need to think anew. Also, those who leave the army should have the opportunity to contribute to the work of this society.

Today, professionals are leaving this country. That gap can be filled by training our armed forces personnel and sending them to those places. That is why we have reduced the retirement age of military service from 22 to 18 years. Others have no problem. We have to plan these anew. We have to think anew.

I wish we could manufacture a new warship in Sri Lanka. We have that power. Only the money has to be found.

I saw that Britain has made these plans until 2035. We need to bring new laws. We will establish the Security Council by law. It is planned to establish the post of National Security Adviser, as well as a National Security Secretariat. Similarly, a tri-forces committee will be appointed for those offices. I will discuss all this and present it to this House. We want to create a new army in Sri Lanka. To do that, a rapidly growing economy is needed.

We have also paid attention to the police. We are getting a report called “Public Security Report” to find out how to improve the police in the next 10 years. I informed the Minister about it.

Now the Police Ordinance has reached the stage where it has to be sent to the museum. We are now working on preparing a new Ordinance.

There are many problems like drug trafficking and human trafficking today. We have to move forward in solving all these issues.

I would especially like to thank all the armed forces personnel who worked to protect this parliament from the violent mobs that day. If they were not there, there would be no parliament in this country today. We would not be able to sit and discuss matters as we are doing today.

Article 03 of our Constitution states that sovereignty belongs to the people. Section 04 states how it works. Legislative power, executive power and judicial power as well as fundamental rights. Also, the referendum is the only opportunity where the people can participate directly. No one can go out on the street and cause trouble. There is no room for violence. The military has the responsibility of protecting these rules.

When it comes to overthrowing governments, the army cannot stand aside. We cannot sit idly by when our Mahanayake Theros are being threatened. According to Article 09 of the Constitution, the army has the power to stop them. Such acts of violence cannot be tolerated. We should stop creating chaos by employing clerics. I do not want to allow this at all.

Today, some members of the clergy are protesting and causing a disturbance. The Sangha has religious activities to attend. They should engage in those activities. It is a different matter that lay people are involved in protests.

Article 14 of the Constitution outlines our fundamental rights. They can be implemented especially to ensure state security, within the limits prescribed by law, for public safety, including clauses on the protection of the Constitution. All these are in articles 15/1, and 15/2. These limits cannot be exceeded.

Some claim today that they are the ones who protect human rights. What have they done? At least we have done these in practice. We have established independent commissions. Before that, the government had brought the International Covenant on Civil and Political Rights (ICCPR) Act.

These people claim to protect human rights but live off the money sent from abroad. That is the reality. Can anybody stand up and tell me they didn’t? I know about these people. I have worked with them. I protected them. They are shouting at me today. We cannot allow chaos in the country in this way.

Now they are trying to arrest the police officers under the guise of human rights. Perhaps the police have violated human rights. If some have done so, we are ready to take action against them if they file cases and they are found guilty.

Whether it is a military officer or a police officer, we need to protect all of them. Human rights charges were filed and my chief security officer and I tried to have him removed. My house was also set on fire. This is the main media headline. I want to work against them. But these people go and ask the Human Rights Commission to remove my main bodyguard. What did he do wrong? Sirasa wanted to remove my chief security director as well. He did not join them. The names of our people were not mentioned.

After I made a statement about this, Sirasa Media Institute sent seven people to attack me. Statements are taken from each person. We will record statements from Duminda Nagamuwa, Vidarshana Kannangara, Dr Nirmal Ranjith Devasiri and others.

Before talking about me, please protect the university students from ragging. Oppose ragging. There should be an opposition as well as a government. I say let’s unite and solve these problems. It is not possible to come back to the street and ask to topple the government.

Everyone in the security forces has a responsibility to protect the government if such a situation arises. Everyone from a Corporal to Field Marshal should work together to protect these institutions. I would like to express my thanks to the three armed forces and the police who are committed to this service.”