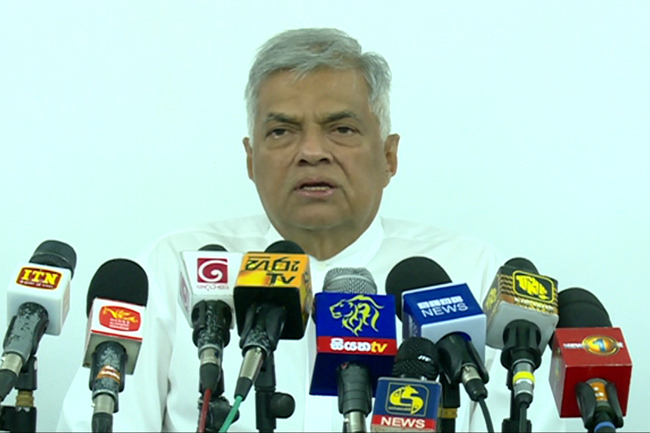 He responded to these claims today (22) while addressing a media briefing held at the United National Party (UNP) headquarters, Sirikotha premises.

Speaking further the former Premier said: “I suggested Sajith Premadasa’s name as our presidential candidate, which was unanimously accepted by the party and we subsequently embarked on the election race along with other allied political parties.

“I can attest that the party’s headquarters and the apparatus worked towards the victory of Sajith Premadasa,” he stressed.

Wickremesinghe said the senior members of the UNP were assigned specific tasks in view of the Presidential Election, adding that he was responsible for campaigning in the northern and eastern areas for Sajith Premadasa.

He says, although he managed to fulfill his task, the votes secured from the southern areas were too little to claim the victory.

Wickremesinghe emphasized on specifically looking into the reason as to why the UNP lost the country’s Sinhalese Buddhist foundation, which was never before experienced by the party.

“Pointing fingers at each other will not earn us any success,” the former Prime Minister said, stressing that neither the party nor its members had any responsibility with regard to managing the funds reserved for the election.

“As I did not take on any tasks involving finances, I deny the allegations pertaining to it,” he added.

These accusations must be investigated and if they are proven to be false, stern actions must be sought against them, the former Premier commented further.

“Taking the party’s future into consideration, we must let new leaders come forward and make new policies. This can create a winning leadership,” he continued.