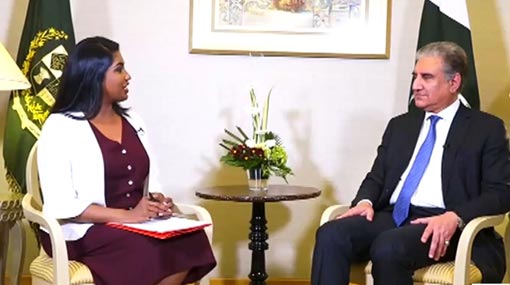 Visiting foreign minister of Pakistan Shah Mahmood Qureshi termed his engagements and meetings in Sri Lanka as ‘excellent’, adding that his country has trust in the new set up in Sri Lanka.

The visiting foreign minister, speaking to the current affairs program ‘@ Hyde Park’ on Ada Derana 24, said that Pakistan has a lot of expectations from the present setup in Sri Lanka owing to the new government’s previous experiences with Pakistan – especially during Prime Minister Mahinda Rajapaksa’s tenure as President.

The Foreign Minister stated that they expect the bilateral relations between the 2 countries to be taken to a new level under the new set up in Sri Lanka and avail the offers Pakistan has made.

Qureshi invited Sri Lankan Foreign Minister, Prime Minister and the President to build on the political goodwill, trust, and confidence the two nations share and convert this goodwill into an economic relationship that is mutually beneficial.

Commending his visit to the Sri Lankan foreign Office, Qureshi stated that all the areas of interest between the 2 nations were discussed in an extended meeting.

He described that the discussions were ‘frank’, ‘candid’ and ‘honest’ owing to the trust and confidence shared between Sri Lanka and Pakistan.

Qureshi pointed out that he is the first foreign minister to visit Sri Lanka after the election as he sees a lot of promise in Sri Lanka.

Stating that Pakistan has no qualms or issues with Indo-Sri Lanka relations, the Pakistani Foreign Minister stated that the difference between the relationships is that Pakistan will only help Sri Lanka and never dictate it.

“We’ve never interfered in your internal affairs. We’ve never instigated trouble in Sri Lanka. I’m not sure of others”, added the visiting Foreign Minister.

The full interview with the foreign minister of Pakistan Shah Mahmood Qureshi will be telecast at 1.00 p.m. tomorrow (03) on Ada Derana 24.