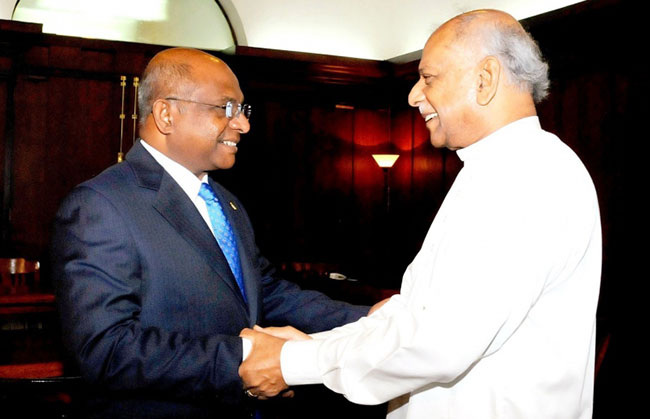 Noting the escalating situation of the pandemic, Minister Shahid commended the Sri Lankan government in their efforts to deter the spread of COVID-19.

The two top diplomats also agreed to ease movements for citizens of their respective countries under the agreement on visa facilitation signed between the two governments, to the extent possible, given the situation.

Considered as a second home for many Maldivians, Minister Shahid stated that all diplomatic connections will be utilized to help Maldivian citizens located outside the country at the time when travel-bans were enforced and airports were closed, effectively grounding them on foreign soil.

Shahid declared that the Maldivians were “most definitely, not alone”.

Minister Shahid affirmed to The Edition that the state was currently working with diplomatic missions based in India, Sri Lanka and Nepal to return Maldivians to the country, as well as provide them with necessities and arrangements during the period in-between.

Minister Shahid also noted that, while individual extractions posed a particular difficulty, the government would account for their wellbeing stating that, “President Solih’s government is prepared to protect every Maldivian citizen.”

“The state will implement its maximum effort to provide whatever assistance possible”, said Shahid, in a conversation with The Edition, “however, we must all understand that borders are being closed, flights are being cancelled - these are extraordinary times that we find ourselves in”.

Maldives now has 13 confirmed and eight active cases of COVID-19, with five recoveries. So far, only tourists and resort employees have confirmed infections in Maldives with no record of local transmissions within the country. The first Maldivian tested positive for the virus in the United Arab Emirates (UAE).

The World Health Organization has classified the spread of COVID-19 as a global pandemic. The novel coronavirus has infected more than 423,600 and claimed over 18,900 lives around the world. However, out of those infected, more than 109,100 have recovered.

Special thanks to the Sri Lankan Govt for agreeing to send medical personnel to the Maldives to further increase our capacity to fight #Covid19. As close neighbours, we will continue to work together and intensify our efforts to ensure the well-being of our citizens.