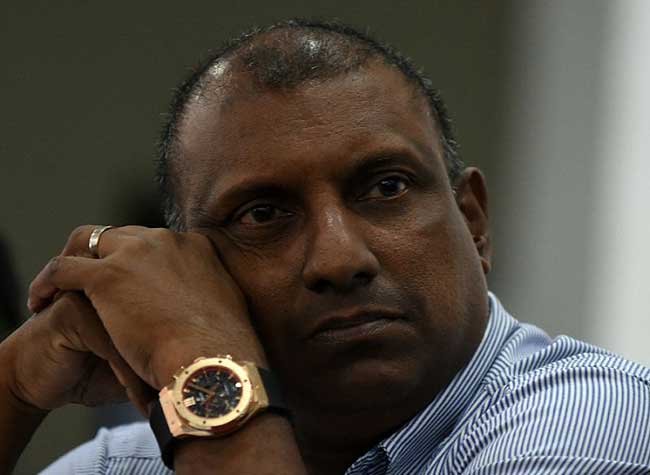 Aravinda de Silva has compared the current Bangladesh side to Sri Lanka’s 1996 Cricket World Cup-winning team of which he was an integral part of.

Ahead of Sri Lanka’s World Cup meeting with their Asian rivals at Bristol on Tuesday, De Silva told The National that Mashrafe Mortaza’s men are worthy of watching out for, although - for good reason - the former middle-order batsman wants the Lions to win.

“As a Sri Lankan, I would back my team to win. But they will have to play out of their skins to achieve that,” De Silva said.

When asked what about Bangladesh reminds him of the 1996 champions, the former captain said: “When you want to win a World Cup, you need to play as one unit. I see that in this Bangladesh side.

“Like we did, they understand each other’s strength and weaknesses, support each other and appreciate each other’s performances,” he pointed out.

De Silva, now 53, played a key role in Sri Lanka’s triumph 23 years ago, winning Man of the Match awards in the semi-finals against India and final against Australia. But he downplayed his own contributions, which included a 47-ball 66 against India in Kolkata, and a century and three wickets with his off-spin versus Australia in Lahore.

“I was glad I was able to contribute to that success, but hadn’t we won, whatever I did would have been of no use,” he said.

Sri Lanka go into Tuesday’s match against Bangladesh having earned three points from three games. They beat Afghanistan by 34 runs following a 10-wicket thrashing at the hands of New Zealand. Their third game against Pakistan was washed out.

But De Silva said Dimuth Karunaratne and his teammates need to step it up in order to qualify for the semi-finals.

“If Sri Lanka are to be in the race, the results of the next two games are critical,” the long-time vice-captain of Arjuna Ranatunga said. “We should have won against Afghanistan more convincingly after racing to 144-1 before being shot out for 201.

“You can’t underestimate any team on these conditions and at this level,” he added. “In the game against Afghanistan, the conditions favoured the seam bowlers. But, unfortunately, we lost wickets to the spinners.”

“While all teams have arrived well prepared, we are still experimenting with our batting order,” he lamented. “For me, the fault remains in the batting order and selections, which we can’t do anything about right now.”

De Silva was surprised to see Dinesh Chandimal, Niroshan Dickwella, Upul Tharanga and Akila Dananjaya being left out of the World Cup squad.

“They played all the games up to the World Cup, and to suddenly leave them out is something unheard of,” he said. “I could have expected one or two changes but not four or five like we have done.”

“He’s a more established batsman we have got out there, and he should be batting at No 4 permanently,” he said about the left-hander, who scored 29 against New Zealand and 78 against Afghanistan.

“The problem seems to be with the Nos 3 and 4, which are vital positions in the 50-overs-a-side format,” he added. “We are missing a No 3.

“Angelo [Mathews] is one of the key players for us, but he should bat at 5 or 6 because of the conditions.”