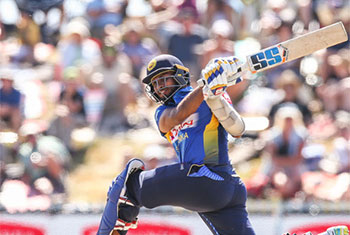 Sri Lankan skipper Dasun Shanaka won the toss and opted to bat as the team eyes their maiden whitewash in a Twenty20 series in the third and final match against Pakistan in Lahore on Wednesday.

Pakistan left out the misfiring Ahmed Shehzad and Umar Akmal while fast bowler Mohammad Hasnain was rested. They are replaced by Haris Sohail, Iftikhar Ahmed and Usman Shinwari.

The visitors won the first match by 64 runs and the second by 35 runs – both in Lahore.

The final match will be a special “Pink Day” to raise awareness about breast cancer in Pakistan.