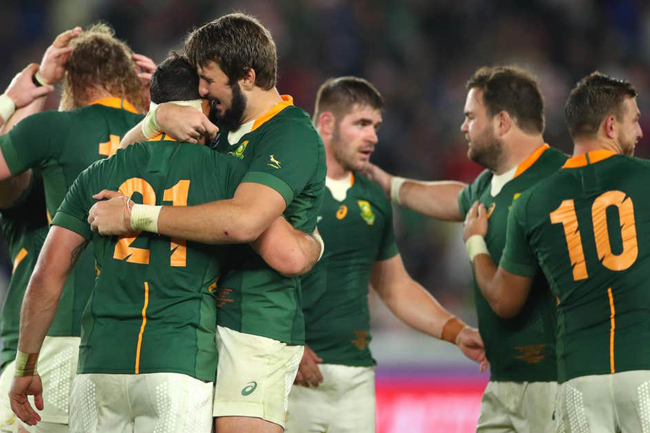 South Africa captured its third Rugby World Cup championship on Saturday, defeating a favored England team, 32-12, and extending the dominance of teams from the Southern Hemisphere in the tournament.

The South Africans broke open a tight defensive struggle late in the second half behind tries by Makazole Mapimpi and Cheslin Kolbe to take the clear victory.

The first half was a battle of attrition with both teams delivering punishing tackles and several players leaving the game early with injuries. But it was the South African forward pack that set the tone, forcing England into several penalties during scrums, which contributed to a 12-6 South Africa lead at the half on four penalty goals from flyhalf Handré Pollard. The England captain, inside center Owen Farrell converted two penalty goals for the English.

South Africa became the first team to win the World Cup despite losing a match in the pool stage. The Springboks were defeated by New Zealand, the two-time defending champion, in their opening game in Japan.

South Africa also won the title in 1995 and 2007; it is the only country to win every Rugby World Cup final it has contested.

The 1995 title, famously recounted in the film “Invictus,” was a turning point not only for South African rugby, but also for the country more broadly as it emerged from sporting isolation of the apartheid era.

Racial divisions persist in the country, and in South African rugby, but Saturday’s victory was delivered by the most racially diverse Springboks team to represent the nation at a World Cup.

Coach Rassie Erasmus has been praised by the players on the team for his open, direct and color-blind team selections, but Kolisi’s leadership also played a role in fostering a team unity that was evident throughout the tournament.

The veteran flanker François Louw, who is white, addressed it at a team news conference before the final.

“Siya’s got a lot of weight on his shoulders in terms of the role as captain, with regards to the makeup of our country and our nation — where we’ve come from, where we are right now,” Louw said. “It’s a role he’s grasped fully. I’ll never forget the first thing he did as captain was encourage those around him to support him and help him lead.”