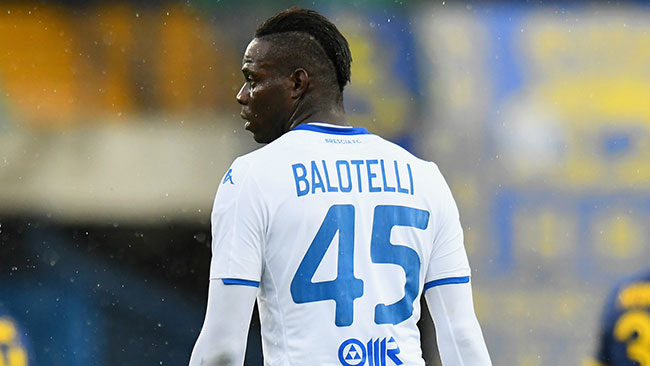 Serie A has confirmed a one-match partial stadium closure for Hellas Verona after supporters racially abused Brescia’s Mario Balotelli, while the club has banned its head ultra for 11 years after defending the discriminatory chants.

Balotelli kicked the ball into the stands and threatened to walk off the pitch in the second half of his side’s 2-1 defeat at Stadio Marcantonio Bentegodi on Sunday after hearing monkey chants.

The referee brought play to a halt before following protocol, with a statement read out in an attempt to resolve the situation, and Balotelli was persuaded to play on, later scoring Brescia’s goal.

But Verona coach Ivan Juric subsequently insisted there was no racist chanting, while the club’s president claimed he did not hear any abuse, and Luca Castellini – the head of their ultras – was involved in a controversial radio interview.

In the conversation, Castellini said the racial element was only “in [Balotelli’s] own head”, that Balotelli cannot be considered “completely Italian” and the fans’ chants were to “make fun” of the striker, rather than racially abuse him.

Serie A’s disciplinary commission on Tuesday confirmed the closure of the Poltrone Est stand by way of punishment, opting against more severe sanctions because the chants only came from that sector.

The confirmation of the punishment came shortly after Verona released a statement condemning Castellini’s comments and barring him from attending matches until June 30, 2030 for “expressions seriously contrary to those that distinguish the ethical principles and values of our club”.