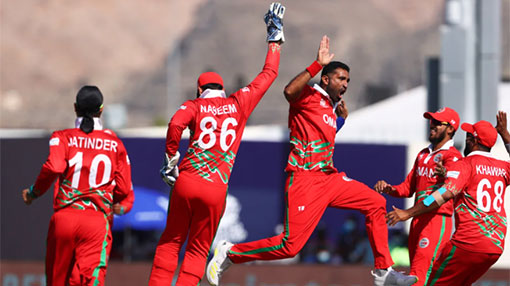 Five long years the teams and fans have had to wait but the ICC men’s T20 World Cup returned on Sunday with 16 sides looking to emulate the West Indies who lifted the trophy in 2016.

It all begins with the first round in which eight teams are split into two pools, from whom the top two will qualify for the Super 12 where they will join the world’s top eight sides.

Among the first-round sides are Sri Lanka, who have played and won more matches in ICC men’s T20 World Cup history than any other team, and Bangladesh, the other ever-present among the eight.

In the opening match of ICC T-20 World Cup Oman won the toss against Papua, New Guinea and elected to bowl first.

The fist qualifier of the World Cup T-20 has been started between Oman and Papua New Guinea.

Oman has won the toss and decided to bowl first.

Next matches will be played between Bangladesh and Scotland.

T20 World Cup 2021 got going with co-hosts Oman taking on World Cup debutants Papua New Guinea in the opening match of the tournament.

PNG overcame a disastrous start where they were 0/2 to post 129/9 against Oman in the opening game of the ICC Men’s T20 World Cup.

The revival was thanks to a national record third-wicket stand of 81 off 60 balls between captain Assad Vala and Charles Amini. Vala was the top scorer of the PNG innings, striking an entertaining 43-ball 56.

However, the middle order couldn’t capitalise. Zeeshan Maqsood ran through the line-up with three wickets in his second over.