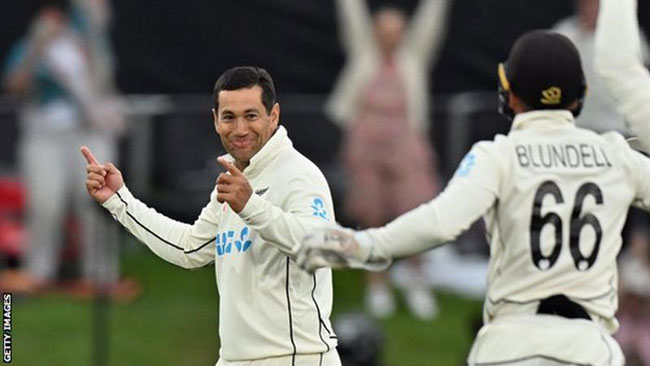 Ross Taylor ended his Test career with the match-winning wicket as New Zealand crushed Bangladesh by an innings and 117 runs in Christchurch to draw the two-match series 1-1.

Part-time off-spinner Taylor had last man Ebadot Hossain caught at midwicket in his 112th and final Test as New Zealand secured victory inside three days at Hagley Oval and bounced back from a shock defeat to Bangladesh in last week’s series opener at Mount Maunganui.

The wicket - which led to Bangladesh being dismissed for 278 in their second innings - was just Taylor’s third in Test cricket and first since striking twice against India in Ahmedabad in 2010.

Taylor, who is also his country’s leading run-scorer in one-day internationals with 8,581 in 233 matches to date, is not finished in international cricket just yet as he will play ODIs at home to Australia and Netherlands over the coming months before quitting Black Caps duty for good.

Taylor said after the second Test: “It’s a great way to finish. I wanted to finish with a win and the guys definitely gave it to me. It was an emotional game for me and my family.”

New Zealand piled on 521-6 declared in their sole innings in Christchurch, with skipper Tom Latham hitting 252 and Devon Conway notching 109.

Taylor made 28 in what proved to be his final Test innings, having been given a guard of honour by Bangladesh on his way to the crease.

Bangladesh were skittled for just 126 in reply in their first innings, with New Zealand’s left-arm paceman Trent Boult taking 5-43, including his 300th Test wicket.

The tourists made a better fist of their second innings as Liton Das scored 102 but did lose their last five wickets for 49 runs.

Kyle Jamieson snared 4-82, making Liton the eighth man out for Bangladesh when he trapped him lbw, while Taylor clinched victory with just the third delivery he bowled.