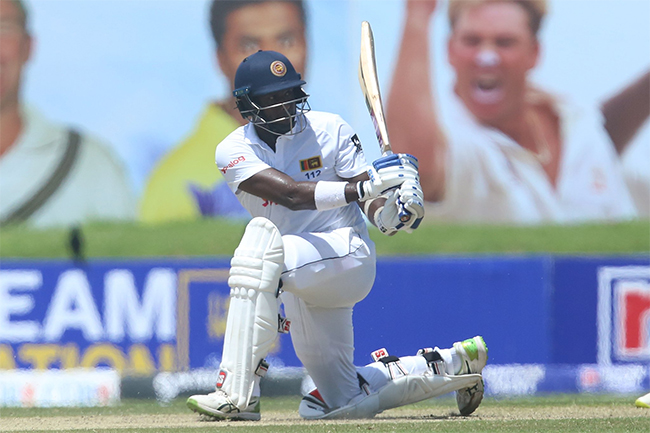 Mathews out of 1st Test after testing Covid-19 positive

Sri Lanka have been rocked by a mid-game positive COVID-19 case, with Angelo Mathews ruled out of the ongoing first Test against Australia in Galle.

Oshada Fernando has come into Sri Lanka’s XI in place of Mathews, who would have played a key role in the hosts’ crucial second innings on day three of the series opener.

🔴 Angelo Mathews tested positive for Covid-19.
He was found to be positive during a Rapid Anti-Gen Test Conducted on the player.
The test was done, as the player was feeling unwell. He has been isolated from the rest of the team members and is following covid-19 protocols. pic.twitter.com/6fUBT7D04z

Mathews, Sri Lanka’s most experienced player, returned a positive rapid antigen test on Thursday after feeling unwell. Sri Lanka Cricket said he has since been isolated from other team members.

Fernando has played 15 Tests, averaging 36 and has one hundred to his name.

Mathews, who made 39 in Sri Lanka’s first innings, should be available for the second Test beginning next Friday given the country’s isolation requirements are only for five days.

More pressing for the home team is the fact they have now been robbed of their fourth all-time leading Test run scorer on a treacherous Galle pitch as they look to fight back from a 109-run first-innings deficit having bowled Australia out for 321 early on Friday.

The 35-year-old is also their most in-form Test batter having piled on 344 runs at 172 against Bangladesh in their most recent campaign, scoring centuries in both matches.

This is the first reported case of the virus for either team through an all-format tour that has been going for almost a month, and Sri Lanka will be hopeful the virus has not spread any further among their camp.

Australia’s players, who are staying at the same hotel as Sri Lanka, are only tested during a Test if they have symptoms. They complete daily RATs on non-match days or whenever they leave their hotel.

Sri Lanka also had multiple players go down with COVID-19 on their T20 tour of Australia earlier this year.

Fernando, 30, is not in the same class as the veteran Mathews but was tipped by former coach Mickey Arthur as being an important part of the Test side’s future