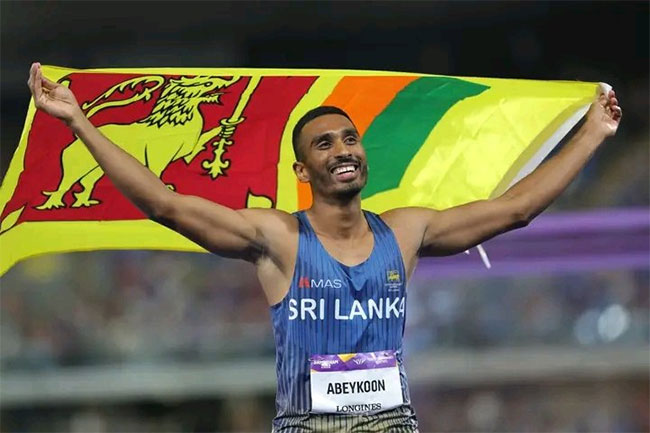 Sri Lanka’s Yupun Abeykoon won the bronze medal in the final of the men’s 100 meters event at the 2022 Commonwealth Games in Birmingham.

Kenyan Ferdinand Omanyala claimed the gold in 10.02 seconds, defending champ Akani Simbine from South Africa was second in 10.13 and Yupun Abeykoon took the bronze in 10.14 seconds.

He becomes the first Sri Lankan athlete to win bronze medal in the 100 meters event at the Commonwealth Games and wins Sri Lanka’s first major athletic medal in 24 years.

The men’s 100m race at the Birmingham 2022 Commonwealth Games was held on the new spick and span athletics track at the Alexander Stadium in front of a packed-out crowd who roared on the finalists in the penultimate event on Wednesday (3 August) with Omanyala winning in a time of 10.02s.

Second was Gold Coast 2018 champion Akani Simbine of South Africa and rounding out the podium, a sensational bronze for Sri Lanka’s Yupun Abeykoon.

Omanyala, the eighth-fastest man of all time over the distance clocked 10.02 to win relatively comfortably ahead of continental rival Akani Simbine of South Africa.

Abeykoon finished a hundredth of a second behind Simbine to take bronze in a hotly contested finish.

The 27-year-old sprinter had qualified for the final of the men’s 100 meters after clocking a time of 10.20 seconds in the third semi-final held at 11.40pm Sri Lankan time on Wednesday (03), in which he placed fourth.The final was held at 2.00 am Sri Lankan time today (04).

The Sri Lankan sprinter ran a time of 10.06 seconds to qualify for the semi-finals of the men’s 100 meters race.

In the process he managed to finish with an all-time fastest timing in the Commonwealth Games history for 100m Heats. The previous fastest time in heats was by Glenroy Gilbert of Canada who did it in 10.10 seconds in the 1994 Victoria Games.

In a Facebook post following his medal-winning heroics, Abeykoon said: “Have no words to explain the feeling that I have right now.”

“I did it! I made myself proud and I made everyone who has been there for me proud! Thank you very much to all of you for being there through every moment of this race.”

“This is just the start of more big things to come in the future. I’m going to keep working hard,” he said.