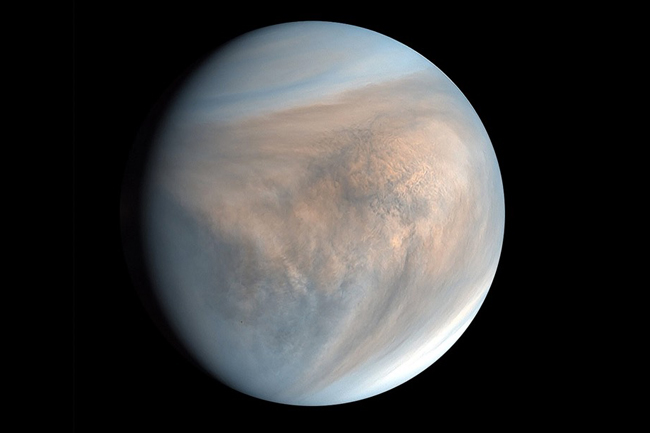 Traces of a rare molecule known as phosphine have been found in the hellish, heavily acidic atmosphere of Venus, astronomers announced Monday — providing a tantalizing clue about the possibility of life.

Phosphine molecules found on Earth are primarily a result of human industry or the actions of microbes that thrive in oxygen-free environments.

The researchers are not claiming life has been detected on the second planet from the sun. But the observations suggest at least the possibility of microbial activity in the upper layers of Venus’ atmosphere, well away from the planet’s inhospitable surface.

“We have detected a rare gas called phosphine in the atmosphere of our neighbor planet Venus,” said Jane Greaves, a professor at Cardiff University in the United Kingdom and lead author of a report published in Nature Astronomy. “And the reason for our excitement is that phosphine gas on Earth is made by microorganisms that live in oxygen-free environments. And so there is a chance that we have detected some kind of living organism in the clouds of Venus.”

Even so, the team said, much more study is needed to support any such claim, extraordinary as it would be.

“In order to make this quite extraordinary claim that there might be life there, we really have to rule everything out, and that’s why we’re very cautious saying we’re not claiming there’s life, but claiming there’s something that is really unknown and it might be life,” said team member William Bains, a researcher at MIT.

Sara Seager, a fellow MIT scientist who studies exoplanet atmospheres, agreed, saying “we are not claiming we have found life on Venus.”

“We are claiming the confident detection of phosphine gas whose existence is a mystery,” she said. “Phosphine can be produced by some (non-biological) processes on Venus, but only in such incredibly tiny amounts it’s not enough to explain our observation. So we’re left with this other exciting, enticing possibility: that perhaps there is some kind of life in Venus’ clouds.”

Mars has long been considered the best candidate in the solar system beyond Earth to have hosted microbial life in the distant past or even in the present, as suggested by background levels of methane. NASA, the European Space Agency, China, India, Russia and United Arab Emirates are all pursuing exploration of the red planet in one form or another.

NASA also is planning a flagship mission to study the moons of Jupiter. Scientists believe one of the planet’s largest and best-known moons, Europa, heated by tidal stresses and gravitational interactions with other moons, harbors a salty, possibly habitable ocean beneath its icy crust. Other frozen moons in the outer solar system, possible “water worlds,” are also candidates for study.

But Venus is the victim of a runaway greenhouse effect in which thick clouds in a mostly carbon dioxide atmosphere trap sunlight, producing temperatures at the surface that soar to nearly 900 degrees, hot enough to melt lead.

In the planet’s upper atmosphere, however, temperatures are much more hospitable. Despite the acidic nature of the clouds, scientists have speculated it may be possible for alien microbes to exist.

“The surface conditions there today are really hostile, the temperature is enough to melt our landers,” Greaves said. “But it’s thought that much earlier in Venus’ history the surface was much cooler and wetter and life possibly could have originated.

“There is a long-standing theory that some of the smallest forms of life might have been able to evolve upwards into the high clouds. Conditions there are certainly not nice, they’re extremely acidic and it’s very windy, but on the other hand, if you’re talking about 50 to 60 kilometers up, then the pressure is much like it is on the surface of the Earth and the temperature’s quite nice, maybe up to about 85 degrees Fahrenheit. So it’s been hypothesized that this is a living habitat today.”

Greaves’ team studied spectra of Venus’ atmosphere using the James Clerk Maxwell Telescope in Hawaii and 45 radio telescope antennas in the Atacama Large Millimeter/submillimeter Array in Chile and were surprised to see unmistakable signs of phosphine. “It was a shock,” Greaves said.

The detection was rewarded with additional observing time on the ALMA array and “in the end, we found that both observatories had seen the same thing, faint absorption at the right wavelength to be phosphine gas, where the molecules are backlit by the warmer clouds below,” Greaves said in a statement.

Only trace amounts were observed, about 20 molecules per billion. But additional research showed natural sources of phosphine — volcanoes, lightning, minerals blown up into the atmosphere, the action of sunlight — would only generate one ten thousandth the amount actually detected.

The team can rule out many non-biological ways to generate the observed levels of phosphine, but that doesn’t mean life is the only explanation. The atmosphere of Venus is 90% sulfuric acid, raising “many questions, such as how any organisms could survive,” said MIT researcher Cara Sousa Silva.

“On Earth, some microbes can cope with up to about 5% of acid in their environment, but the clouds of Venus are almost entirely made of acid,” she said.

Greaves’ team is awaiting additional telescope time to look for signs of other gases associated with biological activity and to determine the temperature of the clouds where the phosphine is present to gain additional insights. Ultimately, future visits by spacecraft likely will be needed to fully resolve the question.

“There can always be something we overlooked,” said Seager. “Ultimately, the only thing that will answer this question for us — is there life, is there not life — is actually going to Venus and making more detailed measurements for signs of life and maybe life itself.”