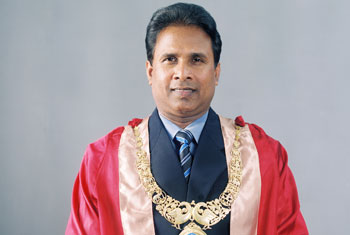 Former Galle Mayor Methsiri de Silva today accused Southern Province Chief Minister, Shan Wijelal de Silva of being responsible for the humiliation faced by his children and wife due to people calling him a thief.

De Silva was removed from his post as Mayor and from the Municipal Council after being found guilty of maladministration and misappropriation of funds.

Methsiri stated if it is proven that he had cheated even 5 cents, he would sell his house and property and even pay ten times the amount.

The former Mayor denied the accusation as baseless and claimed that it was aimed at tarnishing his image.

Addressing a press conference held at his residence today, he further charged that there are several individuals holding posts in Pradeshiya Sabhas and Municipal Councils who are swindling millions of rupees and that his sacking was a conspiracy by the ruling party and not the opposition.