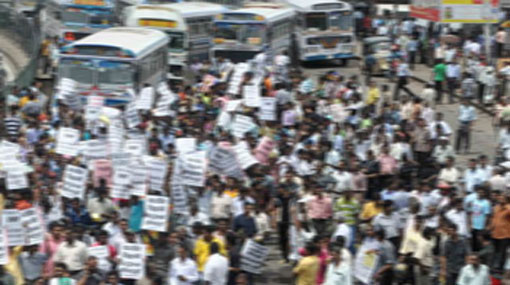 UPDATE: The Galle Road has been closed from Kollupitiya Junction to Galle Face Roundabout due to the protest launched by university students, polcie spokesman ASP Ruwan Gunasekara said.

Heavy traffic congestion was reported along Galle Road, Thunmulla and Bambalapitiya due to a protest march by the university students heading towards Colombo.

Police advised motorists to use alternative routes in order to avoid inconveniences.

The protest march, organized by the Inter University Students’ Federation (IUSF), commenced from the near the University of Sri Jayawardenapura based on several demands.

Police used tear gas to disperse the protestors who were obstructing traffic near the Kollupitiya Junction.

TAGS :  Galle Road ,  Thunmulla ,  Bambalapitiya ,  Kollupitiya ,  protest ,  IUSF ,
Disclaimer: All the comments will be moderated by the AD editorial. Abstain from posting comments that are obscene, defamatory or slanderous. Please avoid outside hyperlinks inside the comment and avoid typing all capitalized comments. Help us delete comments that do not follow these guidelines by flagging them(mouse over a comment and click the flag icon on the right side). Do use these forums to voice your opinions and create healthy discourse.