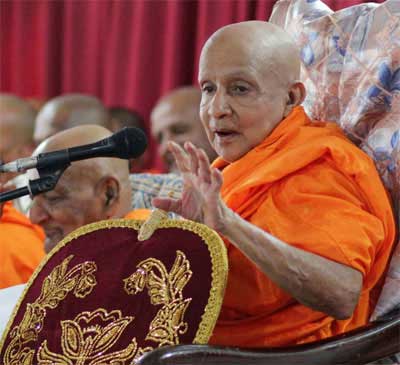 Day of mourning declared for Chief Prelate of Asgiriya Chapter

A decision has been taken to declare the 12th of April, 2015 as a national day of mourning for the Most Ven. Udugama Sri Buddharakkitha Thero, the Chief Prelate of the Asgiriya Chapter of the Siam Nikāya (sect).

Most Venerable Aggamahapanditha Udugama Sri Buddharakkitha Rathanapala Mahanayake Thero had passed away this morning at a private hospital in Singapore while his final rites are to be performed on April 12 at Police Park in Asgiriya.

Secretary to the Home Ministry D.A.H.S. Boralessa stated that the day of mourning was declared following decision reached by the funeral committee which convened earlier today.

Accordingly, all private and state institution are requested to fly the national flag at half-mast on the aforementioned date.

The cremation of the Mahanayake Thero will be held with full state honours and with 17 gun salutes at the Police Grounds, Asgiriya on April 12 at 2 pm.

The remains of the Mahanayake Thero will be taken to Kandy in a procession from the Jayaratne Funeral Parlour today at 7am and will lie in state at the Asgiriya Maha Viharaya in Kandy until the cremation ceremony.

The Central Province Chief Minister Sarath Ekanayake has requested that a yellow flag be hoisted in all public and private buildings in an around Kandy as a mark of respect for the late Prelate.

Meanwhile, The Buddhist Affairs Commissioner has requested the public to display yellow flags at homes and for all government institutions to display the national flag at half mast to express condolence over the passing away of the Mahanayake Thera.

All liquor shops and bars will remain closed on April 12 in view of the state funeral of the Mahanayake Thera.

TAGS :  Udugama Sri Buddharakkitha Thero ,  day of mourning ,  Asgiriya Chapter ,  Siam Sect ,  Singapore ,  Mahanayake ,  Chief Prelate ,
Disclaimer: All the comments will be moderated by the AD editorial. Abstain from posting comments that are obscene, defamatory or slanderous. Please avoid outside hyperlinks inside the comment and avoid typing all capitalized comments. Help us delete comments that do not follow these guidelines by flagging them(mouse over a comment and click the flag icon on the right side). Do use these forums to voice your opinions and create healthy discourse.