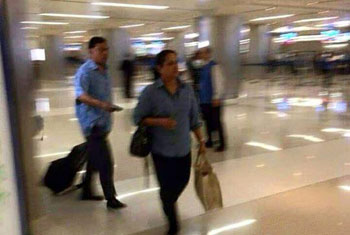 Basil Rajapaksa and wife Pushpa Rajapaksa leaving the country for the US on 11 January, following the defeat of brother Mahinda Rajapaksa at the Presidential Election

Basil to return to country tomorrow

Former Economic Development Minister Basil Rajapaksa is scheduled to return to the country tomorrow(21), sources said. Rajapaksa, speaking to Ada Derana earlier on March 26, said that he will return to Sri Lanka soon and assist in the investigations into allegations against him.

Police spokesman ASP Ruwan Gunasekara on March 25 said that a court order will be obtained to bring down the former President’s brother in order to question him over alleged financial fraud within the Divi Neguma Department.

The former Sri Lanka Freedom Party (SLFP) National Organiser and his wife Pushpa Rajapaksa left the country for the US on 11 January, following the defeat of elder brother Mahinda Rajapaksa at the Presidential Election.

He also resigned from the post of SLFP National Organiser on January 15 after accepting full responsibility for the defeat of Mahinda Rajapaksa at the Presidential Election held on January 8.

TAGS :  Basil Rajapaksa ,  Mahinda Rajapaksa ,  SLFP ,  Divi Neguma ,
Disclaimer: All the comments will be moderated by the AD editorial. Abstain from posting comments that are obscene, defamatory or slanderous. Please avoid outside hyperlinks inside the comment and avoid typing all capitalized comments. Help us delete comments that do not follow these guidelines by flagging them(mouse over a comment and click the flag icon on the right side). Do use these forums to voice your opinions and create healthy discourse.