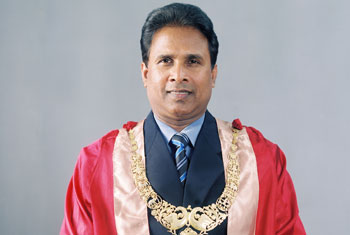 Methsiri was removed from the post through a gazette notification issued by the Chief Minister of the Southern Province Shan Wijayalal de Silva on January 23, 2013.

Methsiri had subsequently filed a motion with the Galle High Court challenging his removal from the post of the Mayor and seeking an order of Certiorari and Mandamus making his removal null and void.

However, the Chief Minister had moved the Court of Appeals, which delivered its verdict on the matter today.

Southern Province CM Shan Wijayalal de Silva says that accordingly the gazette notification issued by him removing Methsiri as Mayor would come into affect once again.

Wijeyalal said that he used the powers vested in him as the Chief Minister and removed Methsiri de Silva from the post of Mayor based on the allegations of administrative and financial irregularities against the latter.

Meanwhile it is reported that Kelum Seneviratne, who serves as Deputy Mayor of the UPFA-controlled Galle Municipal Council, is likely to receive the post of Mayor.

TAGS :  Methsiri de Silva ,  Shan Wijayalal de Silva ,  UPFA ,  Galle Municipal Council ,  Appeals Court ,  Galle High Court ,
Disclaimer: All the comments will be moderated by the AD editorial. Abstain from posting comments that are obscene, defamatory or slanderous. Please avoid outside hyperlinks inside the comment and avoid typing all capitalized comments. Help us delete comments that do not follow these guidelines by flagging them(mouse over a comment and click the flag icon on the right side). Do use these forums to voice your opinions and create healthy discourse.