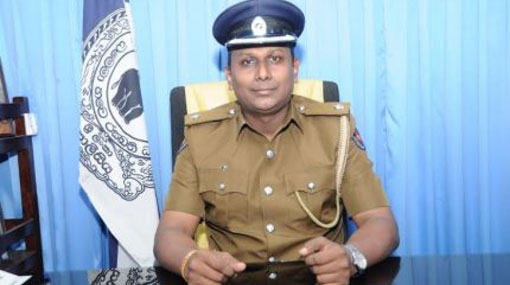 Police Spokesman ASP Ruwan Gunasekara today denied claims that the army corporal, who was arrested following a security breach at an event attended by the President, was only holding a bottle of water in his hand and not a gun.

MP Namal Rajapaksa, with whom the soldier had arrived at the event, however, had claimed that he was carrying only a water bottle.

It has been clearly identified that it was firearm and not a water bottle, the police spokesman said, responding a question from reporters in Colombo.

He also said that the Hambantota District MP has not been question regarding the matter so far.

The spokesman stated that an Assistant Superintendent of Police (ASP) had allowed the corporal to enter the location armed with a gun and that police Special Task Force (STF) personnel who had witnessed this alerted the Presidential Security Division (PSD).

Gunasekara conceded that the PSD was wrong to have released the suspect, who was subsequently arrested by the CID on May 02.

The police spokesman said that investigations are also being conducted on the suspicion that the corporal was in the possession of 2 firearms.

Meanwhile the ASP who had allowed the suspect to enter event has been transferred, he said.

TAGS :  Maithripala Sirisena ,  army ,  Corporal ,  Agunukolapelessa ,  Namal Rajapaksa ,  gun ,  Senaka Kumara ,
Disclaimer: All the comments will be moderated by the AD editorial. Abstain from posting comments that are obscene, defamatory or slanderous. Please avoid outside hyperlinks inside the comment and avoid typing all capitalized comments. Help us delete comments that do not follow these guidelines by flagging them(mouse over a comment and click the flag icon on the right side). Do use these forums to voice your opinions and create healthy discourse.