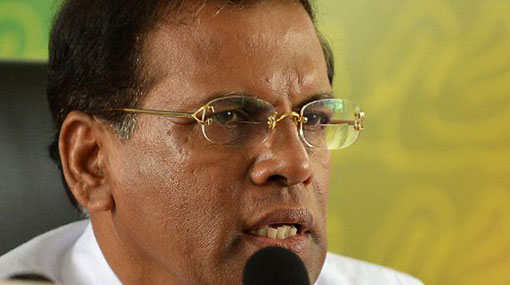 Local Government bodies will come under the supervision of a special commissioner after their automatic dissolution on May 15, President Maithripala Sirisena said.

He added that he intends to hold the General Election prior to the Local Government Polls.

He further said that there would be opportunity in future for voters to select their Local Government Ministers under the new ward system.

He made these observations, speaking at the opening of the Rajitha Senaratne Playground and the new sub-office of the Beruwela Pradeshiya Sabha in Payagala, May 12, 2015.

The President said that the local bodies whose terms would lapse in May 15 would be placed under Special Commissioners, according to the Local Government Act and he said that he intended to appoint as special commissioners, officers who are presently working as Secretaries at Local Authorities.

“It is the nature of the act and it is not a decision of the President to hold the Local Government Polls”, President Maithripala added.

The official term of the LG bodies were scheduled to end in March, however it had been extended until May 15 by the government due to the prevailing political situation in the country following the Presidential Election in January.

The government last week said that the term of the local government bodies that were extended until May 15 will not be further extended and would dissolve automatically.

President Maithripala Sirisena held a discussion on the proposed electoral reforms at the Presidential Secretariat yesterday (May 11).

All the leaders of political parties represented in the parliament were present at this meeting. They held discussions on the proposed 20th Amendment to the Constitution on electoral reforms. All decisions are to be presented for final deliberations before the Cabinet on Wednesday.

The President informed them to direct any further proposals they have in writing, to the President Secretariat before 13th May noon to be taken up for further discussion.

TAGS :  Maithripala Sirisena ,  LG bodies ,  election ,  General Election ,  Presidential Secretariat ,  electoral reforms ,
Disclaimer: All the comments will be moderated by the AD editorial. Abstain from posting comments that are obscene, defamatory or slanderous. Please avoid outside hyperlinks inside the comment and avoid typing all capitalized comments. Help us delete comments that do not follow these guidelines by flagging them(mouse over a comment and click the flag icon on the right side). Do use these forums to voice your opinions and create healthy discourse.