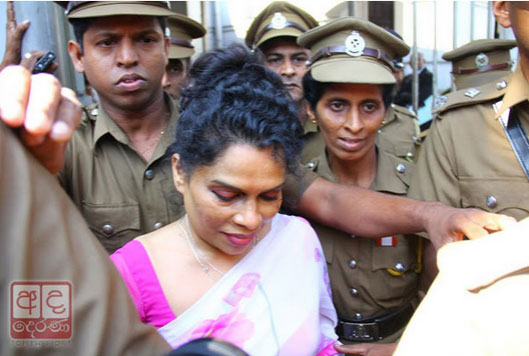 The case filed against Mrs Weerawansa, on charges of falsifying documents to obtain a diplomatic passport, was taken up at the Colombo Magistrate’s Court today when the CID stated that investigations have confirmed that the passport and NIC have both been forged.

The CID also informed court that the Attorney General’s advise would be sought with regard to the next course of action to be taken against Shashi Weerawansa.

Meanwhile attorneys representing the defendant today sought the relaxing of bail conditions previously set by the court, citing Mrs Weerawansa’s adherence to the bail condition of reporting to the court registrar once a month.

Therefore the Magistrate notified that the defendant reporting to the court registrar once every three months would suffice.

The case was postponed to September 11.

TAGS :  Shashi Weerawansa ,  Wimal Weerawansa ,  Colombo Magistrates Court ,  forged ,  passport ,  NIC ,  court ,
Disclaimer: All the comments will be moderated by the AD editorial. Abstain from posting comments that are obscene, defamatory or slanderous. Please avoid outside hyperlinks inside the comment and avoid typing all capitalized comments. Help us delete comments that do not follow these guidelines by flagging them(mouse over a comment and click the flag icon on the right side). Do use these forums to voice your opinions and create healthy discourse.