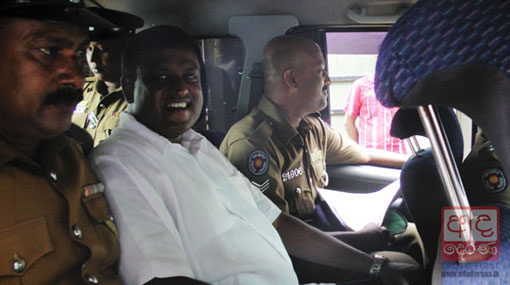 Mayor of Hambantota Eraj Fernando, who was arrested and remanded for allegedly attempting to assault a suspect in police custody, has been released on bail by the Hambantota Magistrate’s Court.

The case was postponed until June 24.

Fernando was arrested on April 29 in connection with the alleged assault incident and kidnap attempt that took place inside the Ambalantota Police Station in March 2014.

During the presidential election in December 2014 the police arrested the Mayor for an attack on a street drama group performing in Hambantota in support of common opposition candidate Maithripala Sirisena.

During that attack a well-known singer Jayathilaka Bandara, the Opposition Leader of the Hambantota Municipal Council Ayub Khan, a journalist Sampath Samarakoon and an organizer of the performance Prasanga Fernando were injured and hospitalized.

TAGS :  Eraj Fernando ,  Hambantota Municipal Council ,  assault ,  court ,  Hambantota Magistrates Court ,  bail ,
Disclaimer: All the comments will be moderated by the AD editorial. Abstain from posting comments that are obscene, defamatory or slanderous. Please avoid outside hyperlinks inside the comment and avoid typing all capitalized comments. Help us delete comments that do not follow these guidelines by flagging them(mouse over a comment and click the flag icon on the right side). Do use these forums to voice your opinions and create healthy discourse.