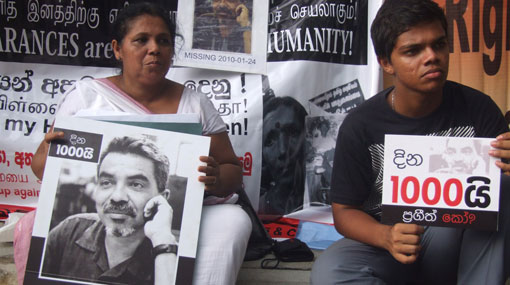 Details on 22 mobile phones, which were used to contact missing journalist Prageeth Eknaligoda, have been disclosed by the Criminal Investigation Department (CID), the police Spokesperson said.

Spokesperson ASP Ruwan Gunasekara said that the CID will attempt to trace the persons who used these mobile phones. “Using the IMEI numbers, the police will also try to locate the persons who imported these devices. A court order has already been issued to the Sri Lanka Customs to produce a report in this regard,” he said.

He also went into say that the court has also directed the Telecommunications Regulatory Commission (TRC) to issue a report in connection with the phone calls made to Eknaligoda with these mobile phones.

TAGS :  Prageeth Eknaligoda ,  Prageeth ,  Eknaligoda ,
Disclaimer: All the comments will be moderated by the AD editorial. Abstain from posting comments that are obscene, defamatory or slanderous. Please avoid outside hyperlinks inside the comment and avoid typing all capitalized comments. Help us delete comments that do not follow these guidelines by flagging them(mouse over a comment and click the flag icon on the right side). Do use these forums to voice your opinions and create healthy discourse.