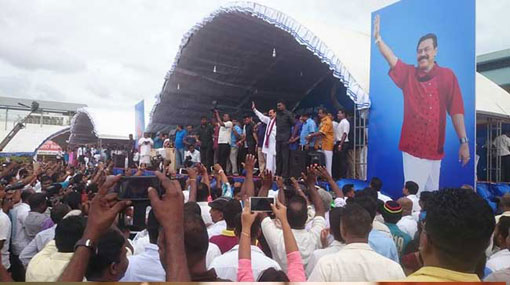 Willing to make any sacrifice to protect SLFP  Mahinda

Former President Mahinda Rajapaksa says that he is willing to make any sacrifice to protect the Sri Lanka Freedom Party (SLFP) and that although he has not betrayed the country or the people, the finger is being pointed at him.

Addressing the inaugural election rally of the United People’s Freedom Alliance (UPFA) at the Salgadu Stadium in Anuradhapura today, Rajapaksa said that following his defeat at the Presidential Election in January, large numbers of people came looking for him at his hometown Medamulana.

Rajapaksa, who is contesting the parliamentary polls on August 17, stated that Colombo was made the fastest developing city in the world and that it was not done in 100 days.

The ex-President also said that it was he who established democracy in the country by holding the most number of elections within the shortest period.

The former Chairman of the SLFP, the main constituent of the UPFA, said that he handed over the chairmanship of the party when it was requested and that he is willing to make any sacrifice for the party.

Rajapaksa said that he transferred powers after losing the election, he was accused of plotting a coup with the Chief Justice and Attorney General.

Rajapaksa said that although he has not betrayed the motherland or the people, the finger is being pointed at him.

He claimed that such accusations are being raised because he did not bow down in the face of foreign powers.

UPFA General Secretary Susil Premajayantha, SLFP General Secretary Anura Priyadharshana Yapa, Opposition Leader Nimal Siripala de Silva, former PM D.M. Jayaratne and other UPFA leaders were present at the rally, which was held under the theme “Let’s give life to the country and a new beginning”.

President Maithripala Sirisena, who recently declared that he would remain neutral at the General Election, had not participated in the event.

TAGS :  UPFA ,  SLFP ,  Mahinda Rajapaksa ,  Anuradhapura ,  Maithripala Sirisena ,
Disclaimer: All the comments will be moderated by the AD editorial. Abstain from posting comments that are obscene, defamatory or slanderous. Please avoid outside hyperlinks inside the comment and avoid typing all capitalized comments. Help us delete comments that do not follow these guidelines by flagging them(mouse over a comment and click the flag icon on the right side). Do use these forums to voice your opinions and create healthy discourse.