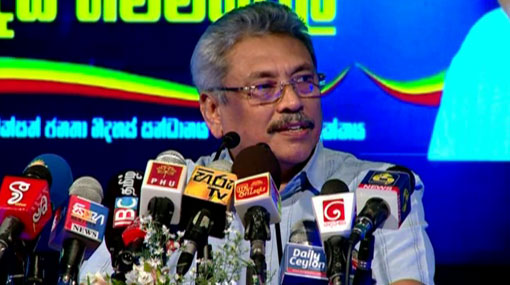 Former Defence Secretary Gotabaya Rajapaksa says the country’s security is the foundation for development and reconciliation and that unfortunately the current leaders of Sri Lanka have given a low priority for security.

Addressing an event on Tuesday (21) supporting UPFA candidate Udaya Gammanpila, he also claimed that the white-coloured van recently arrested with three suspects in Mirihana belonged to the now-defunct Tamil Tigers.

“I live in Mirihana. Mahinda Rajapaksa also lives in Mirihina. A white coloured van was seized in the Mirihana area last night (July 20). The van had wrong number plates.”

“According to information received, the van had been used by the LTTE organisation. Three armed men dressed in civilian clothing were inside. They are now at Mirihana Police,” he said.

Rajapaksa inquired as to why civil organisations are remaining silent on the matter.

“I ask those who then accused us of creating a white van culture, especially (Ven. Maduluwawe) Sobitha Thero, why are you not speaking against this today? I ask those who formed civil societies whether this is good governance?”

TAGS :  Mirihana ,  white van ,  Gotabaya Rajapaksa ,  Mahinda Rajapaksa ,  LTTE ,  Maduluwawe Sobitha Thero ,
Disclaimer: All the comments will be moderated by the AD editorial. Abstain from posting comments that are obscene, defamatory or slanderous. Please avoid outside hyperlinks inside the comment and avoid typing all capitalized comments. Help us delete comments that do not follow these guidelines by flagging them(mouse over a comment and click the flag icon on the right side). Do use these forums to voice your opinions and create healthy discourse.