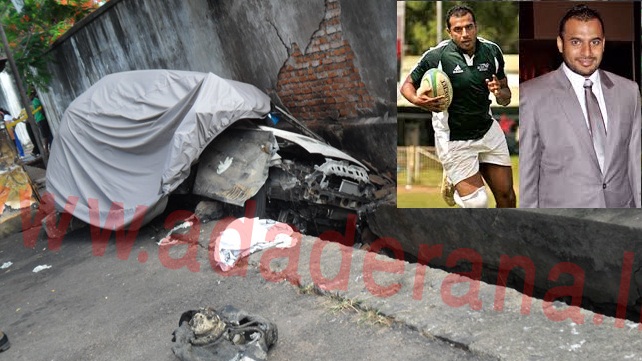 The mysterious death of former national rugby player Wasim Thajudeen is not an accidental one, the Criminal Investigation Department (CID) informed the Colombo Magistrate’s Court citing a report submitted by the Judicial Medical Officers (JMOs) today (27).

The officers who appeared on behalf of the CID apprised the Magistrate that further investigations will be continued accordingly, in this case.

An inquest into the death of Thajudeen was following the emergence of new information with respect to the case recently.

Thajudeen represented S Thomas’ College, Mount Lavinia from 2001 to 2003. He then turned out for Havelock’s SC during the 2005 season where he played in the position of wing three quarter. He was voted the Most Popular Ruggerite of the Year at the Caltex Observer Touchdown Rugby Quiz award ceremony in 2009 as well.

TAGS :  Wasim Thajudeen ,  Rugby ,  SSP ,  IGP ,  CID ,
Disclaimer: All the comments will be moderated by the AD editorial. Abstain from posting comments that are obscene, defamatory or slanderous. Please avoid outside hyperlinks inside the comment and avoid typing all capitalized comments. Help us delete comments that do not follow these guidelines by flagging them(mouse over a comment and click the flag icon on the right side). Do use these forums to voice your opinions and create healthy discourse.