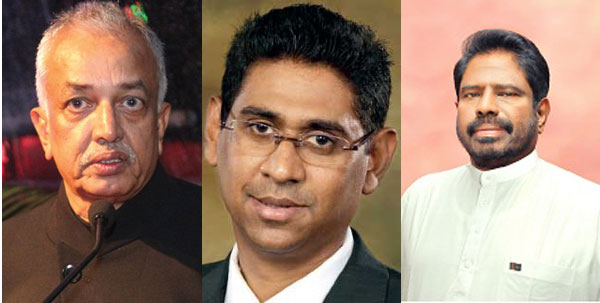 Three new Cabinet Ministers were sworn in before President Maithripala Sirisena short while ago, the Presidential Media Division said.

The new appointments brings the total number of Ministers in the Cabinet to 46.

Forty-two Ministers were sworn in last Friday while Foreign Minister Mangala Samaraweera took oath soon after the election and before the visit of a top level US delegation last month.

Meanwhile the Deputy Ministers and State Ministers of the National Government are expected to be sworn in today as well.

A total of 45 State Ministers and Deputy Ministers are expected to take oaths. While 27 of them will be from the United National Party (UNP) the remainder will comprise of SLFP Parliamentarians.

TAGS :  Maithripala Sirisena ,  Cabinet ,  Ministers ,  Faizer Mustapha ,  Vijith Wijeyamuni Soysa ,  Malik Samarawickrama ,
Disclaimer: All the comments will be moderated by the AD editorial. Abstain from posting comments that are obscene, defamatory or slanderous. Please avoid outside hyperlinks inside the comment and avoid typing all capitalized comments. Help us delete comments that do not follow these guidelines by flagging them(mouse over a comment and click the flag icon on the right side). Do use these forums to voice your opinions and create healthy discourse.