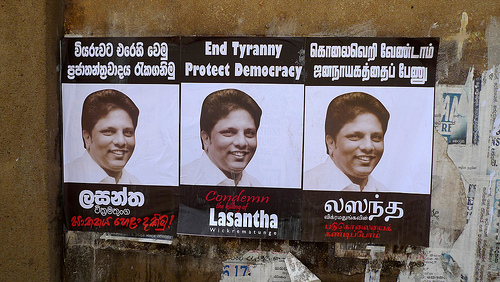 The police headquarters today (08) announced it seek public help to identify the suspects involved in the controversial murder of journalist Lasantha Wickrematunge.

Wickramatunga was shot at Attidiya by unidentified gunmen on motorcycles as he drove to work in January 2009. He died from head wounds after nearly three hours of surgery.

TAGS :  journalist Lasantha Wickrematunge ,  journalist ,  Lasantha Wickrematunge ,
Disclaimer: All the comments will be moderated by the AD editorial. Abstain from posting comments that are obscene, defamatory or slanderous. Please avoid outside hyperlinks inside the comment and avoid typing all capitalized comments. Help us delete comments that do not follow these guidelines by flagging them(mouse over a comment and click the flag icon on the right side). Do use these forums to voice your opinions and create healthy discourse.