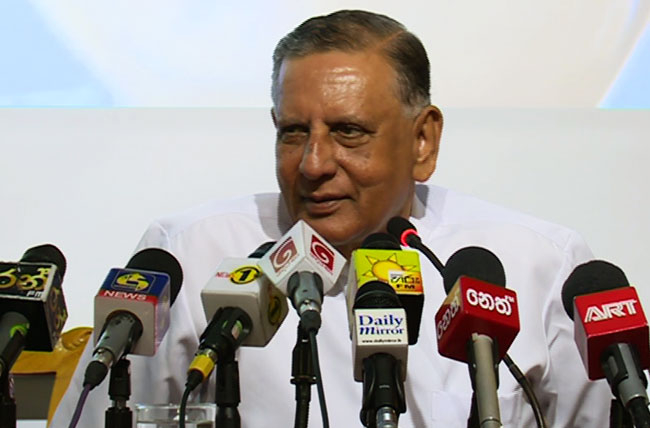 Minister of Home Affairs, Joseph Michael Perera, today said that the recent arrest of three army personnel in possession of a firearm in a white vehicle has finally provided authorities with a much-needed lead to investigate the controversial ‘white van’ culture which had prevailed in Sri Lanka.

“For the first time ever, Mirihana Police found a white colour vehicle with incorrect number plates along with three army personnel. I believe this is a big victory for the people,” he told reporters in Colombo.

According to information uncovered so far, the vehicle had belonged to the LTTE organisation and was taken into military custody under the former government, he said.

Perera said that, once in custody, the vehicle had been used for various activities by army officers appointed, under the leadership of former Defence Secretary Gotabaya Rajapaksa.

He stated that until now the white van phenomenon was something no one had been able to figure out and that apart from knowing that white vans were involved and that people were abducted and murdered, authorities were unable to find out anything else. “Today we have been able to grab one root.”

The minister stated that his government had pledged to completely put a stop to the white van culture and that they have now taken the first step in stopping this.

He stated that investigations relating to the discovery are still ongoing and that the true facts will be uncovered to the country in the near future.

“The white van was captured by the army. It has not been registered. It was under the army. This unit was under Secretary Gotabaya Rajapaksa. From that point onwards, we are looking into it. We will reveal what happened to the remaining white vans,” he said.

Perera further said that the statement given by the arrested suspects have revealed as to who had issued the firearm and that legal action will be instigated once statements have been recorded from other relevant parties.

According to the information uncovered thus far, it had been claimed that the revolver was given by Gotabaya Rajapaksa, that the van was obtained from the LTTE and that it was not registered, he stated.

Responding to a question from a journalist, he said that they believe many more similar unregistered vehicles could exist in the country.

TAGS :  Joseph Michael Perera ,  Gotabaya Rajapaksa ,  LTTE ,  white van ,
Disclaimer: All the comments will be moderated by the AD editorial. Abstain from posting comments that are obscene, defamatory or slanderous. Please avoid outside hyperlinks inside the comment and avoid typing all capitalized comments. Help us delete comments that do not follow these guidelines by flagging them(mouse over a comment and click the flag icon on the right side). Do use these forums to voice your opinions and create healthy discourse.