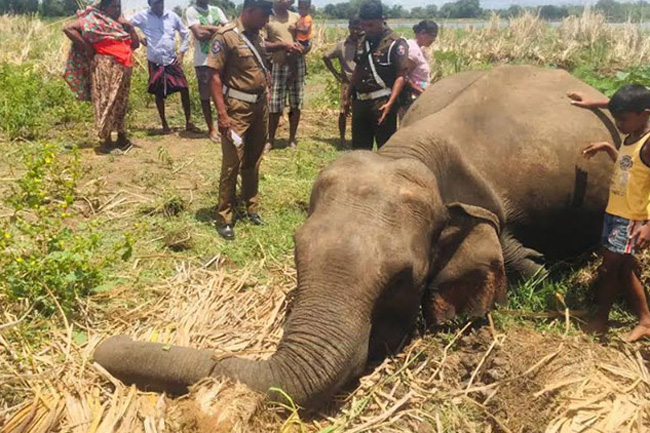 Cause of death of seven female elephants revealed

It is reported that the death of the seven female elephants, whose carcasses were found near Hiriwadunna reserve in Habarana, was resulted by poisoning.

The Director General of the Department of Wildlife Conservation Chandana Sooriyabandara said this was revealed in the three-member committee appointed to look into the matter.

Following a keen study on the report, the reason for the deaths of the female elephants can be announced tomorrow (10), he added.

On September 27, the carcasses of three wild elephants were found near the Hiriwadunna reserve in Habarana and later four other carcasses were also found in the nearby area.

Doubts were rife concerning the elephants’ death and post-mortem examinations were carried out to uncover the cause of the deaths.

Later, on September 28, A three-member committee consisting of a senior veterinary surgeon, an additional chairman and a garden caretaker was appointed by the Wildlife Conservation Department to probe the deaths.

The final report of the Committee, which was submitted on Monday (07), had revealed that the seven female elephants had died by poisoning, the Mr Sooriyabandara said.

However, the type of poison that caused the death is yet to be uncovered, he continued.