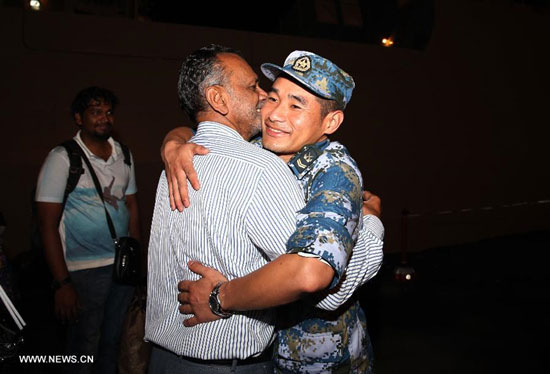 A Sri Lankan national embraces a crew member of the Chinese Linyi missile frigate in Djibouti, on April 7, 2015.

The Government of Sri Lanka today said that at present 54 Sri Lankans have been evacuated from Yemen.

“43 Sri Lankans were evacuated to Djibouti by a Chinese vessel on 6 April 2015, while India and Indonesia each evacuated 3 Sri Lankans. Previously, 5 Sri Lankans who had crossed over to Oman, from Mukalla were received in Salalah by officials of the Sri Lanka Embassy in Oman, who facilitated their return to Sri Lanka.”

“An operational center was set-up in Djibouti by the Sri Lanka High Commissioner in Nairobi to coordinate evacuation and repatriation of Sri Lankans,” the Foreign Ministry said.

“The Government of Sri Lanka appreciates the ready assistance of the Chinese Government and all other Governments who are assisting in the evacuation efforts,” the statement said.

TAGS :  Sri Lankan expatriates ,  Yemen ,  Muscat ,  Sanaa ,  China ,  India ,  Nairobi ,  Oman ,
Disclaimer: All the comments will be moderated by the AD editorial. Abstain from posting comments that are obscene, defamatory or slanderous. Please avoid outside hyperlinks inside the comment and avoid typing all capitalized comments. Help us delete comments that do not follow these guidelines by flagging them(mouse over a comment and click the flag icon on the right side). Do use these forums to voice your opinions and create healthy discourse.